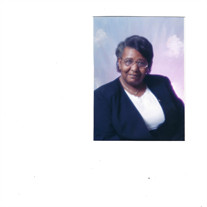 Zella Mae Dilliard, 70, went home to be with the Lord on March 11, 2017 at Brentwood Golden Living Center surrounded by her loving family. She was born June 5, 1946 to the late Dorothy E. Waddell and James H. Dillard in Hopkinsville, KY. Zella accepted Christ at an early age joining Pleasant Green C.M.E. Church in Hopkinsville, Ky. She was very active as a young person and was an usher and a cook of the Kitchen Committee. Her membership was moved to Cleaves Memorial C.M.E. Church in Evansville where she joined the Usher Board and Kitchen Committee there. She graduated from Attucks High School in Hopkinsville and later attended the Christian County Community College was she studied for her CNA. Zella worked at Jennie Stuart Hospital for many years before moving to Evansville in 1989. She became employed at Whirlpool as a cook and worked there until they were shut down. Zella always enjoyed working with children so she obtained a position as a bus aid with Head Start and later as a Foster Grandparent at CAPE until her health prohibited her from working. Zella loved to cook and everyone loved her chocolate pies which she made during the Holidays. She would start taking orders from people around Thanksgiving and make them through Christmas. Her favorite pastime was to watch television, especially the Golden Girls. She was the president of the Resident’s Council at Kennedy Towers. It gave her great joy to check on the others in the building, remember their birthdays and do special things for them. As a sixteen-year breast cancer survivor, Zella proudly participated in the Susan G. Komen Race for the Cure for several years and often solicited donations. She leaves to cherish loving memories daughters: Cornelia Renee Dillard, Antoinette Dillard; grandchildren: Darren Dillard, Sinquis Dillard, Darnishia Durbin; 7 great grandchildren; sisters: Mary Irene Dailey, Charlene Mumford, Mabel Chandler; brothers: Charles Smoot, Willie Canty, Ronnie Wills, Lonnie Kidd, Jonathan Woodard; uncles: Nathaniel Waddell, James Waddell, Ernest Waddell, Bill Dillard; aunt: Vada Waddell; nephew: Berric Dailey; niece: Lonna Buckner; a host of cousins, other relatives, and friends. Services will be Friday March 17, 2017 at 11:00 a.m. at Cleaves Memorial C.M.E. Church with visitation from 9:00 a.m. to service time. R. Mason Brothers Memorial Chapel is entrusted with final arrangements.

Zella Mae Dilliard, 70, went home to be with the Lord on March 11, 2017 at Brentwood Golden Living Center surrounded by her loving family. She was born June 5, 1946 to the late Dorothy E. Waddell and James H. Dillard in Hopkinsville, KY. Zella... View Obituary & Service Information

The family of Zella Mae Dillard created this Life Tributes page to make it easy to share your memories.

Zella Mae Dilliard, 70, went home to be with the Lord on March...

Send flowers to the Dillard family.