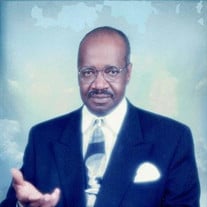 Rev. Willie Joe Holmes was born November 24, 1946 in Christian County, Kentucky to the late Jody Lee Holmes and Bernice Hickman Holmes, the eldest of two children born to this union. He transitioned to eternal life in the early hours of December 5, 2015 at home surrounded by his family. Willie spent his early years in Crofton, KY where he attended local schools of Crofton and graduated in 1965 from Attucks High School in Hopkinsville, KY. He received his spiritual nurture at the Hills Chapel CME Church where he accepted Jesus Christ as his Lord and Savior and accepted his call to preach at the age of 16. Willie matriculated at Lane College, Jackson, TN, where after Jesus Christ, he discovered two more loves of his life: Alpha Phi Alpha Fraternity, Inc. and a beautiful sociology student from Marvell, Arkansas named Leatrice Thomas. He graduated from Lane College in 1969 with a degree in sociology. Willie and Leatrice were married March 13, 1970 in Jackson, TN, Two sons, Darryl and Willie, Jr. were born to this union. He received his master’s degree from Murray State University. Willie and Leatrice moved to Morganfield, KY where he was employed as a teacher/counselor at the Breckenridge Job Corps (now Earle C. Clements). He was also employed at the Peabody and Pyro Coal Mines before becoming an employment counselor for the State of Kentucky at the Unemployment Office in Henderson. He remained there until his retirement in 2009. Willie was an ordained Elder in Full Connection in the Kentucky Annual Conference admitted in 1985. He pastored the following churches: Hills Chapel-Crofton, Wesley Chapel-Madisonville, Bowman Chapel-Morganfield, and Mt. Zion-Elkton. He was honorably retired at the 2015 session of the Kentucky Annual Conference held in Mt. Sterling, KY. Willie will be remembered for his kindness, willingness to help others, and his sense of humor. He will be missed by everyone. He leaves to cherish his memory and legacy: his beloved wife, Rev. Leatrice Holmes (Henderson), sons Darryl (Henderson) and Willie, Jr. (Evansville, IN), sister Janie Holmes Taylor (Crofton), grandchildren Candace, DeJa, Kalyn (all of Henderson) and Chris (Evansville), great-grandson Jerrod (Henderson), mother-in-law Rachel Thomas (Marvell, Arkansas), brothers-in-law Leroy (Beverly) Thomas, Herman (Paulette) Thomas, both of (St. Louis, MO), Donald (Sandy) Thomas (Conway, AR), and Ernest Neely (Atlanta, GA), sisters-in-law Beatrice (Rev. Dr. Roy Manning) (Saginaw MI) and Helen Thomas (Conway, AR), special daughter-in-love Etta Holmes, uncle, Rev. Kenneth Ladd (Terre Haute, IN), several nieces and nephews, his friends, colleagues and members of the Evansville-Hopkinsville District, and a host of other relatives and friends.

Rev. Willie Joe Holmes was born November 24, 1946 in Christian County, Kentucky to the late Jody Lee Holmes and Bernice Hickman Holmes, the eldest of two children born to this union. He transitioned to eternal life in the early hours of December... View Obituary & Service Information

The family of Willie Joe Holmes created this Life Tributes page to make it easy to share your memories.

Send flowers to the Holmes family.