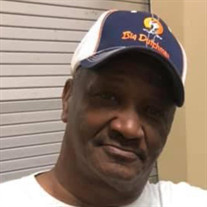 Willie J. Avent, 70, of Mayfield, formerly of Fulton County, passed away on Tuesday, November 9, 2021 at Stonecreek Health Rehabilitation in Paducah, Kentucky. He was formerly employed by K-T Clay Company for 19 years and retired from Franklin... View Obituary & Service Information

The family of Willie J. Avent created this Life Tributes page to make it easy to share your memories.

Send flowers to the Avent family.