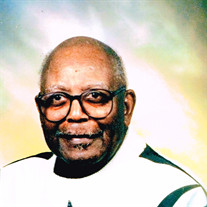 William Henry (Pete) Lawrence, Sr., 94, originally of 1026 Cherry Street and of the last few years resided at Willow Park Independent Living Home, passed away on Sunday, February 12, 2017, after a short illness. William was born on January 28, 1923 and grew up in the Oakdale area of Evansville. William graduated from Lincoln High School in 1942 and served in the U.S. Army. William retired from the U.S. Postal Service after 36 years of public service. William married Pilar Elizabeth Edwards on June 30, 1942. They celebrated their 60th wedding anniversary in 2002. From their union, they were blessed with 12 children. William attended St. John the Apostle and St. Mary’s Catholic churches and was a member of the St. Peter Claver Court 239. He was also a member of the American Legion Otis Stone Post 354. William was also a member of the Lincoln Clark-Douglass Alumni Association. William enjoyed music, dancing, bowling, traveling and spending time with his large extended family. William often shared his philosophy on living and encouraged his family to always move forward with life and not look back. William was preceded in death by his wife, Pilar, and two sons: Anthony Lawrence and William Henry Lawrence, Jr. He leaves to cherish his memory his children: Carolyn Pate and Anita Johnson both of Atlanta, GA; Rita Albert, Lillian Jackson, Paula Williams, Marcia Mosley (Ronald) all of Indianapolis, IN; Philip Lawrence (Cheryl) of Los Angeles, CA; Dr. Marcellus Lawrence (Michelle) St. Louis, MO; Aaron Lawrence (Jawanna) and Andrea Baltzell both of Evansville, IN. A cousin: Harold Jackson and a host of grandchildren, great-grandchildren, nieces and nephews, and many family friends. Entombment will be at St. Joseph’s Catholic Cemetery Mausoleum.

The family of William H. Lawrence Sr. created this Life Tributes page to make it easy to share your memories.

Send flowers to the Lawrence family.