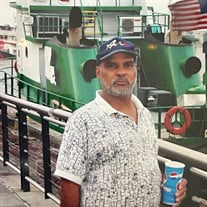 William Gant Fairrow was born October 15, 1948, in Hopkins County, Kentucky, the twelfth of thirteen children of Vernon and Lillie Mae Drake Fairrow. William “Ol’Baby” Fairrow departed this life on January 26, 2022, in St. Paul, Minnesota where he has resided since 2015 with his first-born son and his family. “Ol’ Baby,” as he was affectionately called by his loved ones, graduated from North Hopkins High School in Madisonville, Kentucky in 1969. That same year, on August 30th, he was united in Holy Matrimony to the former Joslyn Brent. Their union was blessed with three children whom he loved dearly and doted on constantly. Ol’ Baby worked for Jordan’s Furniture in Madisonville for several years. Later, he worked for the City of Madisonville for a number of years before ultimately moving to Houston, Texas to help raise his grandchildren whom he loved and adored. William went by many names besides Ol’Baby. Some called him “Bill,” some called him “Pops,” and some even called him “Speedy.” But, his favorite names to be called were “Daddy” and “Granddaddy.” Ol’ Baby would do any and everything for his children and grandchildren. Anyone who knew him knew that. He always had a story to tell you, and a meal to feed you, and he always made sure that you ate it. But that was fine because he was a pro in the kitchen. Everyone that met Ol’Baby loved him. It was hard not to. His heart was as big as the sun; and so was his personality. He loved to fish, he loved to talk (mostly about his kids, grandkids, and sports), he loved to have a good time, and he loved to see his family smile most of all. He was truly one of a kind and we will miss everything about him from now until forever. He was preceded in death by his parents, two sisters, Helen Owens and Verna McElroy, and seven brothers, Charles, Paul, James, Herbert, Bill, Leroy, and Leonard Fairrow. He leaves to cherish his memory his wife of 40 years, Joslyn Merean Fairrow of Houston, Texas; two sons: Gregory (Tameika) Fairrow of St. Paul, Minnesota and Darrell DeWone Fairrow of Louisville, Kentucky; one daughter: Gina Danielle Fairrow of Houston, Texas; one brother and sister-in-law: Bobby and Georgia Fairrow of Madisonville, Kentucky; two sisters and one brother-in-law: Mary Hester Gant, and Diana and John Holmes of Madisonville, Kentucky; 12 grandchildren: Devin, Aaron, Derek, Markisha (Xavier), Carlos, Shatavia, Kee’Yon, Maliq, Darrell Jr., Endia, Janae, and Olivia; five great-grandchildren: Ryan, Gisselle, Legend, Jackson, and Lynnox; extended family: Marion Ann Brown, Kaprisha, Lashjay, Velarrion, and Marketta Burrell, and a host of nieces, nephews, cousins and friends. A mask is required for both services and social distancing guidelines will be followed.

The family of Mr. William Gant Fairrow created this Life Tributes page to make it easy to share your memories.

Send flowers to the Fairrow family.