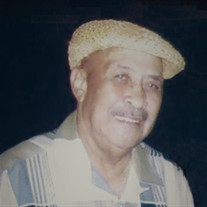 William Edward Davis, age 90, transitioned to his heavenly home on October 20, 2018. Born May 27, 1928 in Madisonville, Kentucky, he was the son of the late Herbert Davis and Annie Bell (Browder) Davis. Bill attended Rosenwald High School where he was a four year letterman for the Rosenwald Tigers as well as the Captain of the team for the final three years of his high school career. Under his leadership, the Tigers won the Kentucky High School Athletic League State Championship in 1946. He was also the class valedictorian when he graduated in 1946. In 2016, he was inducted into the Madisonville All Sports Hall of Fame. Bill was married to the late Dorothy Jean Miller and to that union two children, Daryl (Mary) and Angela (Saul) were born. He was employed by the Daimler Chrysler Corporation in Evansville, Indiana and eventually transferred to St. Louis, Missouri where he retired after 35 years of service. After retiring from Chrysler, he was employed by the Riverview Gardens School District as a crossing guard at Danforth Elementary School for 20 years. Bill was a member of the St. Louis Christian Center where he and Dorothy served faithfully in a variety of ministries. After Dorothy’s death, he married Shirley Barbee White and moved back to Madisonville. He Joined First Assembly of God where he taught Sunday School and was well respected for his knowledge of the bible. He was preceded in death by his brothers: Clarence, Albert, Frank and Warren; his grandson, Paul Jason Carter; and his step-daughter, Terri Broadnax. He leaves behind to cherish his memory his beloved wife, Shirley; his daughter, Mary (Saul); son, Daryl (Mary); step-daughter, Jill Schoene; step-sons: Gary White, Stevie White, and Leslie Gregory (Gloria); and a host of grandchildren, great-grandchildren, nieces, nephews, cousins, and friends. Funeral services will be held Friday, October 26, 2018 at 6:00pm at First Assembly of God, 3406 Hanson Road, Madisonville, Ky. Pastor Chris Manning, officiating. Friends may call after 4pm Friday. Burial will take place Saturday at Memorial Park Cemetery, 5200 Lucas and Hunt Road in St. Louis, Missouri after a visitation from 11am – 1pm at Agape Christian Center 2410 Gardner Drive, St. Louis, Mo. 63136.

William Edward Davis, age 90, transitioned to his heavenly home on October 20, 2018. Born May 27, 1928 in Madisonville, Kentucky, he was the son of the late Herbert Davis and Annie Bell (Browder) Davis. Bill attended Rosenwald High School where... View Obituary & Service Information

The family of William E. Davis created this Life Tributes page to make it easy to share your memories.

Send flowers to the Davis family.