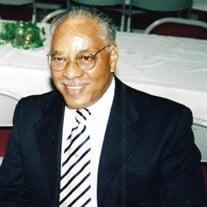 Welden Lloyd Hughes, 83 died Wednesday, April 20, 2022, at 6:57 p.m. at Baptist Health Deaconess in Madisonville, Kentucky. He was born in Clay, Kentucky on March 10, 1939, to the late Alonzo and Ivory Johnson Hughes. Welden was a graduate of J.W. Million High School in Earlington and in 1979 he received his bachelor’s degree from the University of Tampa. He was a member of the United States Air Force from where he retired in 1971 as Master Sergeant. He served in Vietnam in 1970 and was stationed in Spain, France, and England. He had the opportunity to visit other places such as Madrid, Paris, London, Germany Casablanca, Copenhagen, Honolulu, Nueva Laredo, Calgary, Saigon, and Freeport. Among his many accomplishments, he supervised at York Plant in Madisonville, was a material planner at Dana Corp. in Henderson, and was a substitute teacher and census bureau worker in Indianapolis Indiana. All his travels and accomplishments cannot hold a candle to the fact that he was a proud member of the Flower Grove Baptist Church in Madisonville. In addition to his parents, Welden was preceded in death by his son: Welden T. Hughes; brothers: Ollie, Alonzo Jr., Thomas, and Jimmy Hughes; sisters: Delores King and Marlene Beryl Eaves. Welden is survived by his beloved wife: Dorothy Washington Hughes of Madisonville; daughters: Patrice Cox of Huntsville, ; AL and Regina Hughes of Madisonville; son: Gilbert ( Amy) Hughes of Antioch, CA; brothers: Kenneth (Macy) Hughes of Gary, IN, Gilbert (Beverly) of Indianapolis, IN; stepchildren: Teresa Earven of Atlanta, GA, Beverly Acree of Madisonville, Charles Jones, Jr. of Ft. Knox, KY, and Darrell (Cameisha) Jones of Madisonville; brothers-in-law: Frank Washington and James (Lily) Washington both of Madisonville; 10 grandchildren, 6 great-grandchildren, 15 step-grandchildren, 15 step-great-grandchildren; and a host of nieces, nephews, and friends

Welden Lloyd Hughes, 83 died Wednesday, April 20, 2022, at 6:57 p.m. at Baptist Health Deaconess in Madisonville, Kentucky. He was born in Clay, Kentucky on March 10, 1939, to the late Alonzo and Ivory Johnson Hughes. Welden was a graduate... View Obituary & Service Information

The family of Mr. Welden Lloyd Hughes created this Life Tributes page to make it easy to share your memories.

Send flowers to the Hughes family.