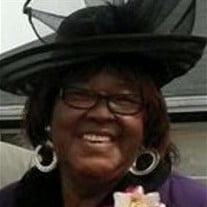 Evangelist Wanda D. Hightower Rutledge was born December 10, 1937 to Forrest and Leola Hightower and departed this life on December 14, 2017. She was united in marriage to the late George “Fitty” Rutledge Jr. in April 1978. Wanda received Jesus as Lord and Savior as a child at Lunsford St. Church of God in Christ, and later joined Eastview Baptist Church. She later served under Pastor Oscar Coleman before becoming a charter member of Word of Faith Christian Center, where she served faithfully under her son and daughter in law, Pastors Marvin and Marsha Hightower, until her passing. She attended Rosenwald High School, and was employed by General Electric. Wanda loved people and was a friend to many. She never met a stranger and loved to laugh. She offered her home to many people who needed temporary sanctuary, and was a special caregiver to Danny Ringold, who she loved as a son. Wanda could be heard every Sunday on her radio broadcast on WTTL, “Telling of God’s Goodness”, which she hosted faithfully for over 25 years. She was an ordained minister of the Gospel and a singer. She would often move the congregation with her heartfelt, Spirit-led songs. Some of her favorites were “I Love the Lord and I Won’t take it back”, and “Yes, Lord, Yes”. She loved God and would not hesitate to share her faith wherever she was, with whomever she came in contact. She was an encourager to everyone she encountered in her no-nonsense way. She was preceded in death by her husband, George Rutledge Jr., both parents Forrest Sr. and Leola Hightower, three sisters; Betty Rae Jackson, Anna Costella Baker and Patricia Frazier; two brothers; Forrest Hightower Jr. and Freddie Hightower, three sons; Patrick, Kent and Desmond Hightower and one daughter Taj Lapae Hightower. She leaves to cherish her memory four sons: Marvin (Marsha) Hightower, Carl William Hightower, Tracy Hightower, George III (Paula) Rutledge; two daughters: Cynthia Rice and Audrey (Archie) Antia. All of her grandchildren, great grandchildren, and great-great grandchildren, who were greatly loved by her; dear nieces and nephews; five sisters: Rose Casey, Vivian (Rev. Larry) Lewis, Birdie Greene, Phyllis (Chuckie) Henry, Virginia (Preston) Stallings; two brothers: Donnis (Shirley) Hightower, James (Daisy) Hobgood; Special adopted daughters: Benda Rice, Tonja Vasquez, Mary Frazier, Dianne Stum, Theresa Palmer and Kay Baxter. Special friends include Ernestine Spencer, Eva Willis and Clara Gray. Wanda will be missed greatly by her family, her Word of Faith family and her friends, but we rejoice that she is in the presence of her first love, her Lord and Savior Jesus Christ. Visitation Monday December 18, 2017 from 4-8 p.m. at Mason & Sons Funeral Home. Services are Tuesday December 19, 2017 at 1:00 p.m. at Victory Church with visitation from 11:00 a.m. until service time. Burial will be in Eastside Oddfellows Cemetery. Mason & Sons Funeral Home is entrusted with arrangements. Leave condolences at www.masonbrothersfs.com.

Evangelist Wanda D. Hightower Rutledge was born December 10, 1937 to Forrest and Leola Hightower and departed this life on December 14, 2017. She was united in marriage to the late George &#8220;Fitty&#8221; Rutledge Jr. in April 1978. Wanda... View Obituary & Service Information

The family of Wanda D. Rutledge created this Life Tributes page to make it easy to share your memories.

Send flowers to the Rutledge family.