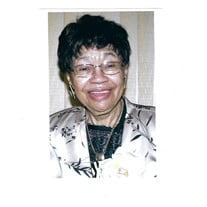 Virginia O Landers, age 90, passed away February 22, 2017 at Good Samaritan Nursing home. She was born on November 11, 1926, in Indianapolis Indiana to the late Owen and Katherine Phelps. Virginia graduated from Lincoln High School in 1944 and in her later years pursued a BA degree from the University of Evansville. She retired from the Vanderburgh County Clerk’s office after 20 plus years of service. Her marriage to Charles Clements produced a daughter Patricia Diane Clements-Stone. She married James M. Landers in 1958 and they were married for 43 years, until his death in 2001. She was a member of Grace and Peace Lutheran church, and was a faithful attendee, before needing to reside in an assisted living facility and eventually in Good Samaritan Nursing home. In years past, she was an active member of the Democratic party, a member of the Lincoln Clark Douglas Alumni Association, and Eastern Star Organization. She was affectionately known as “Ginnie” by family and friends, she loved children, often having her great grandchildren and her cousin’s grandkids spend the weekends with her. She and her husband, James, traveled often, in conjunction with his duties in the Prince Hall Lodge. Virginia loved,“playing card games” and watching the TV show “Wheel of Fortune”. She was known to be forthright about her view of life and did not mind sharing it with her family and friends. Virginia was preceded in death by her brothers, Owen Jr. and Raymond Phelps, sister Kathrine Lorraine Hart, and son, Edward Lee Landers. She leaves to cherish her memory, her daughter Patricia Diane Clements-Stone, son In-law Tyrone (Stoney), of Los Angeles, CA, sister Ruth Borders, Evansville Ind. granddaughters Shelly Re’na Landers-Carter, Evansville, Ind.,Sofia LeBlanc, Rochester, NY, Rosa LeBlanc, Cordova, Tn., grandson, Travis Stone, Dallas, TX., great grandchildren, nieces, nephews, cousins and a host of friends Although her presence here on earth will be greatly missed by all, she will live in our hearts and memories forever.

Virginia O Landers, age 90, passed away February 22, 2017 at Good Samaritan Nursing home. She was born on November 11, 1926, in Indianapolis Indiana to the late Owen and Katherine Phelps. Virginia graduated from Lincoln High School in 1944 and... View Obituary & Service Information

The family of Virginia Olivia Landers created this Life Tributes page to make it easy to share your memories.

Send flowers to the Landers family.