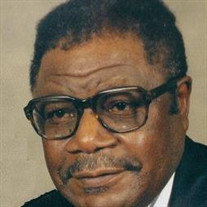 Venston Eugene Holland was born March 12, 1927 to the late Ed Holland and Lula (Walters) Holland in Earlington, Kentucky. He was 7th of seven children. Venston accepted Christ at an early age. He was a lifelong member of Zion Missionary Baptist Church under the pastorship of Rev. J. M. Caldwell and Rev. R. V. Terry. Vince love the Lord. He was a very thankful man knowing how blessed he was. He attended 3rd Avenue and Lincoln High Schools. He served in the U.S. Army during World War II and Korean Wars as a Sargeant 1st Class. He married his childhood sweetheart, Selma (Craig) Holland and to this union one daughter, Barbara Jean (Diddie) (Holland) Edmonds was born. He retired from Faultless Caster Co., a devoted employee for 40 years as a slither operator. Venston was a man who enjoyed serving his community and church in various ways, such as driving his dear pick-up truck to gather food from Evansville Food Bank for 15 years for Zion’s food distribution and singing in the Mighty Men of Zion’s Choir. He also loved his position as Laymen President at Zion and enjoyed being a member of the Masons Organization to name a few. Vince enjoyed talking to people, family, friends or strangers; always sharing his life learned lessons or experiences with others, whether you wanted to hear them or not. He had a great sense of humor. He loved his family and would go to all means to be there for them. (He was the real deal – patient and loving “Poppa”). He was preceded in death by his parents; two sisters, Eunice Hite, and Eva Thompson; four brothers, Claude, Buford, Nathanial, and Elwood Holland. He leaves to cherish fond memories and love; wife, Selma; daughter, Barbara; son-in-law, Freddie Edmonds I; grandchildren, Lori Mack, Lorna Edmonds, and Freddie Edmonds II; great-grandchildren, Gavin and Clayton Brown, Jazz, Alexis, Freddie III, Kashus Edmonds; and a host of nieces, nephews, in-laws, and friends. Special thanks to devoted friends and caregivers – Junior Robinson, Faye Brown, Glenda Wilbourn, Sean Pullom, Josie Vance, and Larry Bushrod. “Dad we love and miss you so much. It sure does hurt now that you’re gone, but we know you’re gone on to a better place. Over and over you said how tired you were. It would be selfish on our part not to want you to be at peace in the Lord, who we love. We will always and forever love and keep you in our hearts.” Thanks Dad Love, Daughter Diddie and Family

Venston Eugene Holland was born March 12, 1927 to the late Ed Holland and Lula (Walters) Holland in Earlington, Kentucky. He was 7th of seven children. Venston accepted Christ at an early age. He was a lifelong member of Zion Missionary... View Obituary & Service Information

The family of Venston Holland created this Life Tributes page to make it easy to share your memories.

Send flowers to the Holland family.