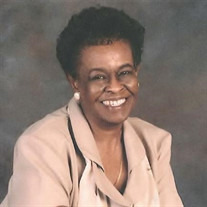 Tommie G. Reynolds, age 82, of Madisonville KY passed away on Tuesday, August 9, 2016 at her residence with her family. She was born December 14, 1933 at Hopkins County Hospital to the late Jennie Holland and Roosevelt Logan. She was preceded in death by her parents; one son, Jeffrey; one sister, Bobbie M. Davis; and two brothers, James and Eulus Gipson. Tommie was an active member of Christ Church Holiness of Madisonville KY. There, she served in many capacities including Sunday School Treasurer, Culinary Dept. President, and church Mother. She played on the Rosenwald High School Girls’ basketball team, was a member of the American Heart Association, many P.T.A.’s, the Arthritis Foundation, and a former member of the American Legion Post 161. There, she served three terms as the Vice-president of the Women’s Auxiliary. She loved to cook and always had a meal and bed for anyone that dropped by. She worked for the Pennyrile Head Start program, was an inspector at Shane’s Sewing Factory of Providence KY and was last employed as Shift Leader at the former Bonanza Steakhouse. Tommie is survived by six sons: Thomas Logan (Teresa), Harry Logan (Debra), Tony Reynolds (Linda) – all of Madisonville, James Reynolds of Port St. Lucie FL, Terry Reynolds (Alfreda) of Clarksville TN, and Shawn Reynolds (Andrea) of Harrisburg NC; two daughters, Rose Jones and Teresa Mack (David) – both of Madisonville; one sister, Virginia Tolbert; one brother, Shelby Corbin – both of Madisonville; 32 grandchildren; 57 great-grandchildren, and a host of nieces, nephews, cousins and friends. Services for Tommie are as follows: visitation Sunday, August 14, 2016 at 2:00pm followed by visitation with the family from 6:00pm to 8:00pm - both at Mason & Sons Funeral Home. Home going service will be Monday, August 15, 2016 at 1:00pm at Oak Grove Baptist Church with Elder Sheila Carter of Christ Church Holiness officiating. Condolences may be left at www.masonbrothersfs.com

Tommie G. Reynolds, age 82, of Madisonville KY passed away on Tuesday, August 9, 2016 at her residence with her family. She was born December 14, 1933 at Hopkins County Hospital to the late Jennie Holland and Roosevelt Logan. She was preceded... View Obituary & Service Information

The family of Tommie Gene Reynolds created this Life Tributes page to make it easy to share your memories.

Tommie G. Reynolds, age 82, of Madisonville KY passed away on...

Send flowers to the Reynolds family.