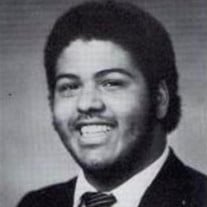 The late Mr. Timothy Pruitt, affectionately known by his family and friends as Tim, Teton, Big Papa and TP, was born to the late Mr. Charles Pruitt Jr. and Rose Nell Pruitt, on August 8, 1964 in Evansville, IN. His Christian belief led him to be baptized at the Greater Norris Chapel Baptist Church in Henderson KY under Rev. Austin Bell. Realizing that the battle was over and the victory was won, Timothy departed this earthly life, Saturday, February 27, 2016 at 1:31 pm at the Deaconess Gateway hospital in Evansville, IN. Tim grew up in Henderson, KY and attended school in the Henderson County school system. He graduated from Henderson County High School in 1982. Tim loved and participated in many sports. His favorite sport was football where he excelled and received numerous honors. In 1981, Tim was named to the All- district team and named to the 2nd All- State Offensive and Defensive Lineman team. He was also named to the All Big 8 team and All Western Kentucky team. Tim's exceptional football talent and accomplishments earned him two (2) full ride athletic scholarships in football: one to Kentucky State University and another to the University of Evansville. After college, Tim was employed by Peno’s Auto Parts and Gamco Products as a hand buffer. He was also a General Manager of Mr. P’s Pizza. Tim loved to laugh and joke around with his friends and family. He always helped others in need and loved his family dearly. Tim's smile would brighten a room. He lived his life with no regrets and lived life to the fullest. He was awarded the prestigious honor of being a Kentucky Colonel from the Governor. He later married Judith Floyd and during their 10 year union, Tim was a stepfather to two stepchildren, Colin and Francesca Floyd, whom he loved dearly. Tim was preceded in death by his father and mother, Mr. & Mrs. Charles Leonard Pruitt Jr. and Rose Nell Pruitt; his maternal grandmother and grandfather: Anna Mae Davis and John Henry Owens; and his paternal grandmother and grandfather: Irene Pruitt and Charlie Pruitt. Sr. To cherish his memories, he leaves his loving siblings; two sisters: Ann Weaver of Chicago IL, and Gloria Pruitt of Henderson KY, (Tim’s amazing caregiver over 15 years); six brothers: John Moss, Billy Armstead, Charles (Mary) Pruitt, Robert (Lillie) Pruitt, and Bobby Bridges all of Henderson KY and Patrick Pruitt of Frankfort KY; five (5) aunts: Geneva Shane of Detroit MI, Jo-Ann Pruitt and April Pruitt of Evansville IN, Kathy Owens and Rene Owens of Minneapolis MN. Tim also leaves to cherish his memories a host of nieces, nephews, great nieces, great nephews, and great- great nieces and great-great nephews and cousins along with a host of loving friends. Services will be held Saturday, March 5, 2016 at 11:00am at Greater Norris Chapel Church in Henderson, KY. Visitation will be Friday, from 6:00pm – 8:00pm also at the church. Burial in Fernwood Cemetery in Henderson. Mason Brothers Audubon Chapel is in charge of arrangements. Condolences may be left at www.masonbrothersfuneralservices.com

The late Mr. Timothy Pruitt, affectionately known by his family and friends as Tim, Teton, Big Papa and TP, was born to the late Mr. Charles Pruitt Jr. and Rose Nell Pruitt, on August 8, 1964 in Evansville, IN. His Christian belief led him... View Obituary & Service Information

The family of Timothy Pruitt created this Life Tributes page to make it easy to share your memories.

The late Mr. Timothy Pruitt, affectionately known by his family...

Send flowers to the Pruitt family.