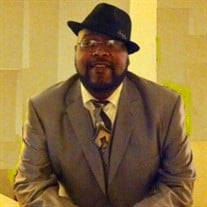 Timothy Eric Moore was born April 2, 1959 to the proud parents Herman R. Moore Sr. and Mary A. Mayes-Moore in Evansville, IN. Timothy departed this life Wednesday August 16, 2017 at 9:15 a.m. with his mother, family, and fiance’ by his side. On July 19, 1959 this beautiful little boy was baptized at Grace Lutheran Church at the age of 3 months and became a confirmed member at the age of 14 years old. Timothy graduated from Central High School and studied Music with an emphasis in Voice at the University of Evansville. He was employed by Red Spot Paint & Varnish Company and later worked in Security at Casino Aztar. Timothy’s beautiful voice moved many people. He sang in the Jr. Choir at Grace Lutheran Church and then in the famous “Sounds of Grace”. Many said his voice made the day at Weddings and other functions. When he sang with the Sounds of Grace Choir, he performed in different venues throughout the country including churches where he moved people to tears and to laughter. Timothy, who many called “Boss Big Chocolate”, was a humorous, caring person, who drove a studded black car. Tim Eric is probably saying about now, “Settle down Mama, settle down.” He was preceded in death by his father Herman R. Moore, Sr. He leaves to cherish his memories his mother: Mary A. Mayes-Moore, brother Herman R. “Buddy” Moore, Jr. of Evansville; sisters: Cheryl Darlene Lawrence (Phil) of Encino, CA, Wendy Lorita Moore Horne of Evansville; son: Jeremy Hammerstein of Raleigh, NC; uncles: Maurice Mayes (Rachel) of Evansville, Frank W. Mayes of New York; aunt: Doris Moore of Evansville; great aunt Corria Mimms of Madisonville; step-grandmother Altavia Mayes of Princeton, KY; he also leaves to cherish his memories a fiance’ Peggy Pixley of Newburgh and his loving cat “Lovely”; a host of nieces, nephews, cousins and friends. Services are Sunday August 20, 2017 12:30 p.m. at Grace & Peace Lutheran Church with visitation from 11:30 a.m. until service time. Burial in Oak Hill Cemetery. Arrangements entrusted to R. Mason Brothers Memorial Chapel.

Timothy Eric Moore was born April 2, 1959 to the proud parents Herman R. Moore Sr. and Mary A. Mayes-Moore in Evansville, IN. Timothy departed this life Wednesday August 16, 2017 at 9:15 a.m. with his mother, family, and fiance&#8217; by his... View Obituary & Service Information

The family of Timothy Eric Moore created this Life Tributes page to make it easy to share your memories.

Send flowers to the Moore family.