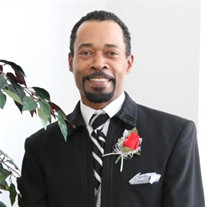 Terry Wayne Smith, Sr., age 62, passed away March 16, 2019 at his home in Evansville, IN. He was affectionately known by family and friends as “Sugar-Boy.” Terry was born December 30, 1956 in Evansville, Indiana to Grover Goines and Barbara Bond. He attended Lincoln Elementary and Bosse High School. In his early days, Terry worked at Gillum’s Gas Station on Lincoln Avenue. He also worked in maintenance at the University of Evansville. In 1990, Terry Wayne moved to Colorado for a change in life. Terry’s strong work ethic was demonstrated in his self-employment as a carpenter and auto mechanic. He used his skills to remodel homes and work on cars for friends. In addition, Terry also helped orchestrate several daycares in Colorado. Upon returning to Evansville, he worked in maintenance at the Carver Daycare Center. Terry loved to travel. In the spur of the moment, he would just “get up and go.” But the most important thing Terry cherished was “Family.” Terry was a caring and nurturing Family Man and touched many lives in his own way. He loved his brothers and sisters, grandkids, the daycare kids in Denver CO and his best friend, Pierre Lynch. Terry will live on through his eldest daughter, Meiko (Vaughan) Burnette of Denver CO; youngest daughter, Schauntai (Charlie) Anderson of Indianapolis IN; son, Terry Smith Jr. of Indianapolis IN; three grandchildren from Aurora CO: Cimion Williams, Jaylen Jones, and Sierra Burnette; two grandchildren from Indianapolis IN: Charlie Anderson, Jr. and Ja’Schayla (Arias) Williams; one great-grandchild in Indianapolis; sisters: Valasaka Griffith of Evansville IN, Arlene Smith (Malcolm) Riley of Evansville IN, Gaberella Smith of Anderson IN, and Pamela Smith (Rodney) Watson of Evansville IN; brothers: Clidy Goines and James Jordan – both of Evansville IN; many nieces and nephews; his companion, Vickie Groves; and a host of other loving family members from Colorado and Indiana. A Memorial Service for Terry will be held on Saturday, March 23, 2019 at 1:00pm at R. Mason Brothers Memorial Chapel. Condolences may be left at www.masonbrothersfs.com

The family of Terry Wayne Smith Sr created this Life Tributes page to make it easy to share your memories.

Send flowers to the Smith family.