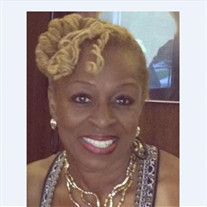 Terri Broadnax, daughter of the late James (Sackie) White and Shirley White Davis, transitioned to her heavenly home on May 4, 2017. She was surrounded by family and friends at her home in Antioch, Tennessee. She accepted Christ at an early age and joined East View Baptist Church under the pastoral leadership of Rev. Erie Pullen and was an active member for many years. Upon moving to Nashville, Tennessee, she became a member of Lake Providence Baptist Church where she worked tirelessly as a greeter and with the Cancer Survivors’ Ministry. Terri was a graduate of Madisonville North Hopkins High School where she was a member of the marching band and the cheer squad as well as a variety of other activities. As a graduate of Western Kentucky University majoring in Public Health and Safety, she joined Delta Sigma Theta Sorority, Inc. where she remained an active member for 43 years. As an employee of Phillip Morris, USA, she worked as a sales representative in Louisville, Kentucky, Atlanta, Georgia, and Wilmington, Delaware before retiring in 2008. She leaves to cherish her memory her mother, Shirley White Davis; her stepfather, William Davis; her children: Robin Broadnax of Baltimore, Maryland and Robert Broadnax, Jr. of Wilmington, Delaware; brothers: Gary White of Danville, Virginia, Stevie White of Madisonville, Kentucky, and Leslie Gregory (Gloria) of Madisonville, Kentucky; sister, Jill D. Schoene of Nashville, Tennessee; step-siblings, Darryl (Mary) Davis, Angela (Saul) Carter, both of St. Louis, Missouri; an uncle, George White; and aunts, Yvonne White and Ruby White of Earlington, Kentucky; and a host of nieces, nephews, cousins, and friends. Services will be Saturday, May 13, 2017 at 1:00pm at First Baptist Church in Madisonville, KY. Visitation will be Friday, May 12, 2017 from 4-8:00 pm at Mason & Sons Funeral Home. Burial at West Side Odd Fellows Cemetery.

Terri Broadnax, daughter of the late James (Sackie) White and Shirley White Davis, transitioned to her heavenly home on May 4, 2017. She was surrounded by family and friends at her home in Antioch, Tennessee. She accepted Christ at an early... View Obituary & Service Information

The family of Terri White Broadnax created this Life Tributes page to make it easy to share your memories.

Terri Broadnax, daughter of the late James (Sackie) White and...

Send flowers to the Broadnax family.