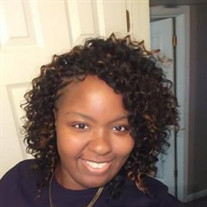 Tasjai Bone&#8217;t (Flagg) Toliver was born on December 6, 1988, to her mother, Teisha M. Flagg, in Evansville, IN. She passed over this life on October 2, 2021, at Piedmont Fayette Hospital in Atlanta, Ga. Tasjai was married to Warren Eugene... View Obituary & Service Information

The family of Tasjai Toliver created this Life Tributes page to make it easy to share your memories.

Send flowers to the Toliver family.