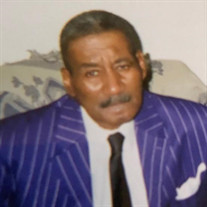 A dearly beloved father, grandfather, brother and friend, Sidney Davis Leavell Jr. was born on September 12, 1937 and was called to glory on Monday, April 22, 2019. He was born In Madisonville KY to Sidney Davis Leavell, Sr. and Earlie Mae Leavell. Sidney was a welder by trade for 40 years and was privileged to help erect one of the tallest buildings in the United States, The Sears Tower in Chicago, IL. Sidney also enjoyed riding motorcycles, fixing cars, fishing, watching westerns (Gun Smoke) and wearing his cowboy hats and boots. His favorite phrase was “Man Alive!” Sidney was a born again Christian and member of Oak Grove Baptist Church in Madisonville, KY where he served as Deacon. Deacon Leavell became a part of the Oak Grove family following in the steps of his mother, Earlie Mae, and his siblings. He began coming in the early 2000’s often sitting quietly in the back enjoying the service. As his relationship with the Lord strengthened, he became a candidate for Deaconship. He was constantly studying the word to show himself approved before the Lord. He became an ordained Deacon and served as the Chairman of the Deacon and Trustee Board. After the passing of Sister Minnie Baker, Deacon Leavell took over the helm as Superintendent of the Sunday School. He served in this capacity until illness prevented him from doing so. Deacon Leavell supported the church both spiritually and in stewardship. As a member of the Brotherhood.he became a mentor to the young men in the church. He prayed fervently, studied the word and lived his life as an example of what faith in God will do. Deacon Leavell faithfully attended Sunday School, training and almost every special function at the church. It was at Oak Grove that Brother Sydney met his wife, Sis. Freida. They worshiped and served the Lord together until her passing in 2014. Deacon Leavell will always have a special place in the hearts of Oak Grove Baptist Church. Sidney was preceded in death by his Father and Mother; brother Bill Leavell and his beloved wife Freida Leavell. Sidney leaves to cherish his memory two sons: Maurice Leavell and Nathaniel Leavell; four daughters: Samantha Leavell, Cindy Leavell, Tiffany Leavell and Pamela Jackson; five grandchildren: Jhani, Shawon, Shamar, Cherice and Truth. Sidney also leaves behind brothers: Michael (Yon) Leavell and David Anderson; sisters: Lucy Reno, Margaret Harris, Janet Harris, Earlie Mae Anderson; one uncle: J.W. (Phyllis) Clemons; and a host of nieces and nephews.

A dearly beloved father, grandfather, brother and friend, Sidney Davis Leavell Jr. was born on September 12, 1937 and was called to glory on Monday, April 22, 2019. He was born In Madisonville KY to Sidney Davis Leavell, Sr. and Earlie Mae... View Obituary & Service Information

The family of Sidney Davis Leavell Jr. created this Life Tributes page to make it easy to share your memories.

Send flowers to the Leavell family.