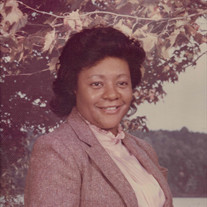 Sandra Faye Thomas, age 71, passed away Friday, February 12, 2016 in Madisonville, Kentucky at her home. Sandra was born on August 29, 1944 to Frances Duerson Patton and John Henry Young in Hopkins County Kentucky. She attended Branch Street School and graduated from Rosenwald High School in Madisonville. Sandra worked at the ENRO Shirt Factory, York International, and General Electric. She was a faithful member of Lively Stone Church of God in Christ in Nortonville, Kentucky and was the church pianist for over 40 years until her health failed. Sandra was married to Fred Thomas on January 16, 1970. They were together until his passing on November 20, 1983. She leaves to cherish her memory her step-father, Huland Patton, Sr.; one brother, Huland Patton, Jr.; four sisters: Allie Liles, Dorothy Patton, and Mary Patton – all of Madisonville KY, and Vickie Guice of Junction City KS; and a host of aunts, uncles, nieces, nephews, cousins, other relatives, and friends. Services will be held Thursday, February 18, 2016 at 1:00pm at Lively Stone Church of God in Christ in Nortonville KY with same day visitation from 11:00am until service time, also at the church. Bishop Alphonso Scott officiating. Burial in Eastside Odd Fellows Cemetery in Madisonville KY. Mason & Sons Funeral Home is in charge of arrangements. Condolences may be left at www.masonbrothersfuneralservices.com

The family of Sandra Faye Thomas created this Life Tributes page to make it easy to share your memories.

Send flowers to the Thomas family.