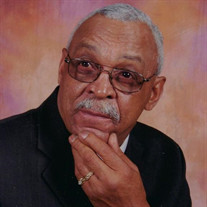 Russell Evans (R.E.) West Sr. was born on January 24, 1941 in Springfield, TN to the late Rev. Russell West and Nannie Mae Frey West Walker. Russell transitioned to his heavenly home on Sunday October 27, 2019 surrounded by his family at St. Anthony’s Hospice Lucy Smith King Care Center. He received his education from Henderson City Public Schools and graduated from Douglas High School. While at Douglas, Russell played football and was a member of the band. After high school he enlisted into the United States Army where he served faithfully for 13 years. At the time of his honorable discharge from the Army he was ranked at Sargent 1st Class (SFC). After serving in the Army, he graduated from Lockyear College with an Associate Degree in Accounting, and later received a HVAC Masters License. Russell was baptized at Seventh Street Baptist Church at an early age, and continued to serve faithfully and devotedly as a Deacon. Deacon West was always willing and ready to provide his service to his church, wanting to ensure that the heating and air conditioning elements were always working efficiently. In addition to his parents, he was preceded in death by his siblings: Nora Mae Gough, Charles Dempsey West and Alice R. Brooks. Russell was married to the love of his life Anna Helena Hawes West, for over 60 years and to this union 5 children were born: Felita A. (Derwin) George, Russette Faye (Roger, Sr.) Hazelwood, Lorraine H. (Terry, Sr.) Dixon, Russell E. (Kim) West, Jr. and Randy E. West. He is also survived by 14 grandchildren, 9 great-grandchildren, siblings Myrtle Brooks, Genel Gibbons, James R. (Rosalyn) West, Shernon (Jodi) West, Nadine D’Abreu, and Katrina Walker. In-laws Rev. Anthony M. Brooks Sr., Elmer Lee (Dada) Hawes, Katie (Laffoon) Williams, and Susie Davie and a host of nieces, nephews, cousins and friends. A special thank you to all of his Hospice team.

The family of Russell Evans West Sr. created this Life Tributes page to make it easy to share your memories.

Send flowers to the West family.