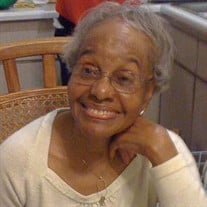 Rumyrtle Phern Kendrick Cole Moorman was born in Newburgh, Indiana on December 2, 1929 and departed this life in Gig Harbor, Washington on June 15, 2020. She was the 4th child of Andrew Jackson Kendrick and Nina (Quarles) Thomas Kendrick. Rumyrtle was an early follower of the Baptist Christian faith, first at Seventh Street Baptist Church in Henderson, Kentucky then at Hartford Memorial Baptist Church in Detroit, Michigan. She was a faithful worshiper, usher, Sunday School teacher and tither. She regularly attended Wednesday Bible study and prayer meetings. Rumyrtle was educated in Henderson, Kentucky and graduated from Douglas High School. She later earned a Bachelor of Arts degree from Wayne State University in Detroit, Michigan. She was an avid traveler having visited all 50 states of The United States and many other countries: Canada, England, France, Mexico, Italy, Spain, Egypt, China and Australia, plus many of the Caribbean countries. On her travels she collected a little turtle figurine, from each state or country. She had them from all over the USA and the world. She was preceded in death by her parents, Andrew and Nina; her brothers: Marion Kendrick, Milton Kendrick and Cleatis Kendrick. She is survived by her sister, Iriah Jefferson in Detroit, Michigan. She met and married Pringle Cole Jr. and from that union had 3 sons, who succeed her: Roland (Kathleen) Cole of Port Orchard, Washington; Oliver (Denise) Cole of Detroit, Michigan; Ira (Maria) Cole of Hendersonville, Tennessee. She was married to Edward P. Moorman for 29 years. Rumyrtle also leaves to cherish her memory, 17 grandchildren, great grand-children and great-great-grandchildren, nieces and nephews; sisters-in law: Ervenia Kendrick in Henderson, Kentucky and Carolyn Kendrick in Beechwood, Ohio. Graveside service is 10:00 a.m. Monday July 6, 2020 in Fernwood Cemetery. Mason Brothers Audubon Chapel is entrusted with arrangements. Leave condolences at www.masonbrothersfs.com.

The family of Rumyrtle Phern Kendrick Cole Moorman created this Life Tributes page to make it easy to share your memories.