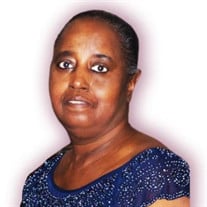 On Dec. 15, 1946, Ruby Pearl Boyd Scisney was born to Alexander and Carrie Lee Boyd. She was the fifth child of that union. She grew up in Nortonville, Kentucky and graduated from South Hopkins High School in 1964. It was at South Hopkins High that she and the first love of her life, Forrest Scisney, became high-school hearts. Long before courting began in the ninth grade, they actually met while kids in elementary school. By 1964, the two had gone their separate ways. Ruby went to Nassau College in New York and became a nurse; Forrest joined the U.S. Army, beginning what would be a three-decade military career. Later, they both got married, had children, and got divorced. Little did they know that 43 years later, they would find each other once more. So, Ruby got a second chance at her first love, and she took it. She and Forrest got married in 2003, bringing five children from their previous marriages to their new union. Furthering her career in nursing, in 1976, Ruby enlisted in the U.S. Army and served four years. She received a medical retirement and was honorably discharged in 1980. Ruby had spent much of her career working in Michigan. In 1998, she moved to Las Vegas and worked at the VA hospital there, and other hospitals until her retirement. Left to cherish fond memories of her and her life include her husband, Forrest Scisney; of Las Vegas, Nev., and children NaTarsha Barnes of Detroit, Yvonne Scisney of Kenosha, Wis., Paul Scisney (Amanda) of Norcross, Ga., Tonja Scisney of Bremerton, Wash., and Forrest Scisney II; siblings Eva Pugh, Clarence Boyd (Diane), Joyce Bourne, and James Boyd (Stephanie); grandsons Tyler Miller, Anthony Mathis (Courtney), and a host of nieces and nephews that she loved so dearly. Ruby had a big heart. She truly loved everyone she encountered and “never met a stranger.” Indeed, she made it her business to keep in touch with ALL of her friends and family members. She died in Las Vegas on September 5, 2021, at the age 74.

On Dec. 15, 1946, Ruby Pearl Boyd Scisney was born to Alexander and Carrie Lee Boyd. She was the fifth child of that union. She grew up in Nortonville, Kentucky and graduated from South Hopkins High School in 1964. It was at South Hopkins High... View Obituary & Service Information

The family of Ruby Pearl Scisney created this Life Tributes page to make it easy to share your memories.

Send flowers to the Scisney family.