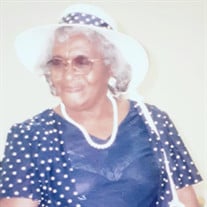 Ruby Aline Lockett (Hackner) 90 years old, daughter of Alonzo Hackner and Elnora Hackner, transitioned from the green pastures of earth on April 25, 2020. Ruby retired from St. Mary’s Hospital after many years of devoted employment. She loved to sing gospel songs of joy such as “This Little Light of Mine” being her favorite; which she loved to sing in the Lincoln Senior Citizens Choir in Evansville. She lived her life as outlined in Luke 6:38 which states “Give and it will be given unto you.” Ruby thoroughly enjoyed catching a bus to local thrift stores or venturing through yard sales hoping to find a treasure to give as an endearing gift to her family or friends as tokens of love. Her hobby of painting figurines and bestowing them on birthdays and holidays to family and friends gave her joy. Her heart was as warm as her infectious laugh that was guaranteed to brighten your day! Ruby was a long time and devoted member of Nazarene Missionary Baptist Church led by Rev. Larry Rascoe Sr. where she served in the Circle of Faith Missionary Group and the gospel Rock of Ages Choir. Ruby is the last of the fourteen beloved offspring of Alonzo and Elnora Hackner. She was preceded in death by seven sisters: Betty Hackner of Indiana Catherine Hines of Indiana Estella Fleming of Illinois Jacqueline Farmer of Indiana Leona Banks of Indiana Luella Dixon of Indiana Marian Farmer of Missouri And six brothers: Bill Hackner of Indiana Charles Earl Hackner of Indiana Donald Hackner of California Edward Hackner of Indiana Louis Hackner of Indiana Wilber Hackner of Indiana From the marriage of Forrest and Ruby Lockett she leaves cherished memories to twins Ricardo Lockett and Rodney Lockett of Indiana Fathaya Lockett of Nevada Ramont Lockett of Illinois And loving memory to Forresa Merriweather whom passed April 20, 2020. Ruby also was grandmother to seven grandchildren and eight great grand children. She will be missed by many family members and friends but her little light will continue to shine forever in our hearts.

The family of Ruby Aline Lockett created this Life Tributes page to make it easy to share your memories.

Send flowers to the Lockett family.