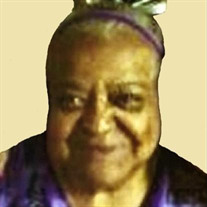 Ruby Louise “Ruby Cat”Fairrow , 72, went home to be with the Lord on Thursday February 2, 2017 in her home in Orlando, Florida. She was born to Sadie Scisney and Samuel Frazier, Sr. on March 26, 1944.She was a member of Christ Church Holiness Church. Ruby attended Rosenwald High School and later completed training to become a Certified Nursing Assistant. When her children were very young, she worked at Hopkins County Hospital. She later went on to become a coal miner at Providence #1 where she was rock duster. Ruby Loved the warm climate and scenery of Florida. She lived there many years agoand was happy to move back with her daughter, Mickey, and her family about two years ago. One of Ruby’s favorite fun things to do was to go fishing. She also loved to play cards and cook big meals for her family. In addition to her parents, Ruby was preceded in death by siblings: Minnie Mayes, Elmer and Delmer McNary, and Sam Frazier, Jr. She leaves to cherish fond memories children: James Fairrow (Kim), Ricky Fairrow (Chantel), Mickey Cottoner (Arless), Michael Fairrow, Bobbi Fairrow, Lexus Kirkwood; brothers: John Thomas Frazier,Sr., George “Fitlo” Rutledge, Jr.; Ruby is also survived by Tracey Hightower, Cynthia Hightower Rice, and Donald Reed, Sr. as well as a host of grandkids, great grandkids, nieces, nephews and friends. SPECIAL THANKS: Special thanks to James “Bullethead” Foster, a dear family friend and the Mayme & Roth Mason Family who have been lifelong friends to our family for many years. We are forever grateful to you all!

The family of Ruby Louise Fairrow created this Life Tributes page to make it easy to share your memories.

Send flowers to the Fairrow family.