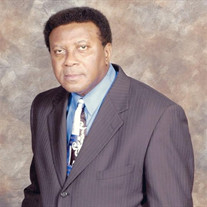 Roy Edward Hawes, 75, of Henderson, Kentucky departed this life on Friday, October 18, 2019. He was born in Henderson County Kentucky on July 15, 1944 to the late Virgil and Mildred Banks Hawes. Roy graduated from Douglass High School in Henderson County, Kentucky and upon graduation, he proudly joined the United States Air Force, where he served for several years. He professed his faith in Christ at an early age at Pleasant Hill Baptist Church, in Hebbardsville, KY. He later resided in Henderson, KY where he continued his Christian journey with Greater Norris Chapel Baptist Church. He remained a devout and faithful member until such time of his failing health. Roy loved family gatherings, and would often welcome all who desired to come to his home for such occasions. He was also a big sports enthusiast, always cheering on his favorite team the Kentucky Wildcats. Although Roy was a sports enthusiast, he was more of an enthusiast for Christ; never wavering on his faith, always putting God first. Roy was preceded in death by his parents, Virgil and Mildred Banks Hawes; siblings, Frances Hawes, Lorene Adcock, Marthella Benson, George Hawes, and Arthur Hawes. Roy leaves to cherish his memories: Kathleen Scruggs of Louisville, KY, Dorothy Baker of Henderson, KY, Riina (Billy) Davis of Henderson, KY, Reena (James) Bizzell of Warrensville Heights, OH, and Byron (LaVoda) Hawes of Evansville, IN; and a host of nephews, nieces, and cousins.

The family of Roy Edward Hawes created this Life Tributes page to make it easy to share your memories.

Send flowers to the Hawes family.