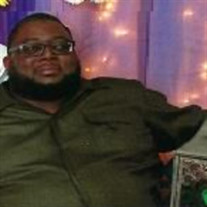 Robert Earl Williams began his life’s journey on July 17, 1971, in Hattiesburg, MS. Robert’s life journey ended on Thursday, August 19, 2021, at St. Vincent Hospital in Evansville, Indiana. Robert was born to the late Jerry Faye and James L. Williams, Sr. He grew up in Lumberton, MS, and graduated from Lumberton High School in 1989. During his youth and high school years he developed a love for music and sports. He loved singing and playing the saxophone, enjoyed playing football, basketball, and lifting weights. He earned his Associate Degree in the fall of 2015 and his Bachelor of Science Degree in June 2021 from Indiana Wesleyan University. Robert relocated to Evansville shortly after Hurricane Katrina and met his wife, Camille. They were married on April 24, 2010, and he became dad to her two children, Kalil and Ava. The following February, their son Cameron (Little Bob) was born. Robert was a member of Victory Temple COGIC, where he held several positions including Minister and Youth Minister. He loved the Word of God and working with youth. Robert was a long-time employee of ResCare where he worked for several years and took his advocacy to heart fighting for those individuals who couldn’t fight for themselves. He was also an avid supporter of several charities. In addition to his parents, Robert is preceded in death by his grandparents and sister, Katesa Crain. He leaves to cherish his memory his wife: Camille; children: Kalil, Ava, and Cameron of Evansville, IN; bonus son: Robert Pittman of Elizabethtown, KY; brothers: James (Melissa) Williams of Cincinnati, OH, Chris (Jazmeka) Crain of Milwaukee, WS, Tyrone Bowens, and Shawn Crain; sisters: Shakera Crain, Sheila Crain, Gozetta Crain who all reside in Mississippi; a host of aunts, uncles, cousins, nieces, nephews, and friends. A mask is required for visitation and service.

The family of Robert E Williams created this Life Tributes page to make it easy to share your memories.

Send flowers to the Williams family.