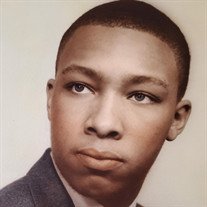 Robert Lee O’Hara Jr. affectionately known as “Sweets and Uncle Bob” was born October 21, 1940 to the late Mary Chinn O’Hara and Robert Lee O’Hara Sr. On February 15, 2020, at the age of 79, he left this earth for his eternal home. He accepted Christ at an early age and was baptized by the late Reverend L.S. Smith at Liberty Baptist Church in Evansville, Indiana. Robert was a graduate of Lincoln High School, class of 1958. He went on to attended Tennessee State University in Nashville, Tennessee. Upon leaving college, he was drafted into the United States Army where he served honorably for two years until discharge. Robert then moved to Michigan City, IN and was employed at the Indiana State Prison. After a career of many years, he returned home to Evansville. Following many years as a resident of Evansville, he relocated to Easton, Pennsylvania in 1996. In addition to his parents, Robert is preceded in death by his sister: Vetris F. Martin; Maternal Grandparents: James and Mattie F. Chinn; Paternal Grandparents: Charles and Sarah O'Hara. He leaves to cherish his memories two sisters; Gwendolyn O’Hara Hatcher of Merrillville, Indiana, and Nanette C. Francis of Sicklerville, New Jersey, one nephew; Matthew D. (Woop) Hatcher Jr. (Larrie Jo) of Evansville, Indiana, two nieces; Jhourdan Francis of Philadelphia, Pennsylvania and Jyllian Francis of Allentown, Pennsylvania and a host of great nieces, nephews, cousins and friends. Robert will be fondly remembered and truly missed.

The family of Robert Lee O'Hara Jr. created this Life Tributes page to make it easy to share your memories.

Send flowers to the O'Hara family.