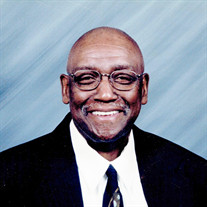 Robert Herman Greer, age 74, of Evansville IN went to be with the Lord on Thursday, May 5, 2016 at his home with his loving sister Betty, his caregiver, by his side. He was born January 17, 1942 in Evansville, IN. He attended Third Avenue Elementary and Lincoln High School. He had a passion for sports and excelled in skating and swimming. His favorite pastime was watching WWE. He would sit on his porch for hours at a time and enjoyed every moment of it. He shared a deep love for his family. He met no strangers and was well respected for his integrity, honesty, and gentle spirit. He enjoyed the simple things of life and continued to grow in favor of the Lord. Robert worked at the Salvation Army for 40 years. He stood outside many day ringing bells at Christmas raising money to help others until he retired due to his health. He accepted Christ at an early age. As a young child, he attended St. James Missionary Baptist Church where he sang with the Buds of Promise Youth Choir. He was also a former member of Mt. Olive Galilee Baptist Church where he was Superintendent of the Sunday School and an usher in the church. He truly loved people and was known and loved by many. He later reunited with Greater St. James Missionary Baptist Church where he sang with the Male Chorus and remained a faithful member until death. He was preceded in death by his father, Herman N. Greer; mother, Theresa L. Martin; and a sister, Ann Gray. He leaves to cherish his memories, his sisters: Betty Andrews, Alice Jackson (Otis) – both of Evansville, and Ora Dennis of Newburgh IN; brothers: Freddie Greer (Sherri) of Evansville IN, Otis Greer (Camille) of Memphis TN, and Enrico Martin of Evansville IN; nieces: Sara Gray, Karla March, Debra Hughes, Sherri Aviento, Tiffany Harris, Ki-Ki Ogburn-Dennis, and Zya-Lexia Greer; nephews: Sean Louis, Johnny Gray, Gary Ogburn, Sr., Bobby Ogburn, Jr., Everett Gray, and Vincent Gray; and a host of great nieces and nephews. Funeral services will be held Friday, May 13, 2016 at 11:00am at Greater St. James Missionary Baptist Church, 465 South Elliott Street, officiated by Rev. Richard Pollard. Burial at Oak Hill Cemetery. Friends may visit from 10:00am to service time Friday at the church. Condolences may be left at www.masonbrothersfs.com

Robert Herman Greer, age 74, of Evansville IN went to be with the Lord on Thursday, May 5, 2016 at his home with his loving sister Betty, his caregiver, by his side. He was born January 17, 1942 in Evansville, IN. He attended Third Avenue... View Obituary & Service Information

The family of Robert Herman Greer created this Life Tributes page to make it easy to share your memories.

Robert Herman Greer, age 74, of Evansville IN went to be with...

Send flowers to the Greer family.