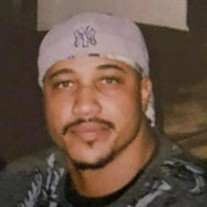 Reko Deprae Levels was born June 5, 1974, to Mary Jane Carter and John Levels. His family started calling him “Big Boy” early on. Sadly, Reko passed from this life on June 26, 2019 at his residence. As a child, Reko enjoyed comic books and swimming. He was a very good self-taught swimmer who loved to hit the pools every summer. Although he and his twin brother, Meko, were known to be mischievous together, Reko was typically the one who masterminded their antics. Reko attended school through the Evansville-Vanderburgh School Corporation. For a time, he also attended Piney Woods School, a boarding school in Piney Woods, Mississippi. Reko was very bright but was always more interested in the lessons learned outside the classroom. He showed an aptitude in computers, but never pursued that as a formal field of study. As an adult, Reko worked a variety of jobs, including telemarketing and corporate cleaning. Reko always had a muscular build but was never into health food. A steady diet of pizza and peanut butter would keep him happy. Reko will be remembered for many things; including his big laugh, his proclivity for mischief, and a spirit so deep that you had to spend quality time with him to uncover everything that was great about him. Reko is survived by daughters; Aysha Levels, Mariah Hurse, A’Maya Levels, and Mikayla Levels; sons, Spencer Cordell and Reko Levels, Jr. (“RJ”); grandchildren Nyrobi Levels and Reighley Levels; sisters, Denise Griffith-Taylor, Bruceann King, and Andrea Owsley; brothers, Meko Levels, David Griffith, Terry Gish, Jonathan Levels, Chester Levels, Darius Staten, and Antjuane Meriweather; his longtime companion, Elizabeth Levels; aunts and uncles; nieces and nephews, and a host of friends.

The family of Reko Deprae Levels created this Life Tributes page to make it easy to share your memories.

Send flowers to the Levels family.