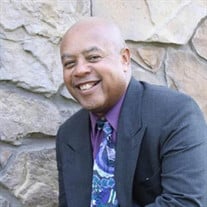 Reginald V. Weir affectionally known as Reggie, was born February 14, 1956 in Hopkins County, Kentucky to Felton and Virginia Weir who preceded him in death. Reggie was a proud alum of Providence High School, Class of 1974. He was an esteemed employee. He was a masterful mechanic. He began his career as a mechanic at Bogess Chevrolet and Hawkins Chrysler in Madisonville. With wit and curiosity, he asked James Scott to teach him how to drive trucks. As they say, “the rest is history!” Reggie went on to work as a truck driver for over thirty years. He was known as “Candy or Candyman” in the trucking industry. Reggie hauled coal for Shirly Garrett Trucking. He also hauled other cargo such as metal, gravel and general freight while employed with Donald G. Bowling Trucking, Inc. and M&M Trucking, Inc. Reggie enjoyed trucking, fast cars, four wheeling and rebuilding engines. Reggie gave his life to Christ at an early age and remained a faithful member at Pleasant Hill Missionary Baptist Church. Although he drove out every Sunday, he stopped by the church every Sunday to render his tithes and offerings in service to the Lord. Reggie tried to live a life pleasing to the Lord. You could count on Reggie to have a smile on his face and turn your frown right side up. He was full of corny country jokes. His co-workers have said that he never cussed or said a wrong word about anyone. Born on Valentines Day, he was a man of love who demonstrated the love of Christ in his actions with everyone he met. Some of Reggie’s greatest joys included his late beloved brother Erwin Gray, his nieces A.K.A “his girls”, the love of his companion Lori and little miss RaeLynnae. Reginald V. Weir departed this life on July 23, 2020 at the age of 64 and made it to his destination to gain his heavenly reward. His beloved parents Felton (Virginia) Weir and brother Erwin Gray preceded him in death. He leaves to cherish his memory his Sister-in-Law, Lelia Gray; Nieces: Vicki (Michael) Smith, LaDonna Gray and Hope Gray; Great Nephews Desmond Gray, Ryan (Shukita) Hicks Sr., Jordan Smith; Great-Great Nephews: Ra’Sean Davies and Ryan Hicks Jr. “RJ”; Great Nieces: Brittany Smith and Iman Bell; Great-Great Niece: Amoir Gray and his devoted friend and companion Lori Utley along with a host of cousins and friends.

Reginald V. Weir affectionally known as Reggie, was born February 14, 1956 in Hopkins County, Kentucky to Felton and Virginia Weir who preceded him in death. Reggie was a proud alum of Providence High School, Class of 1974. He was an esteemed... View Obituary & Service Information

The family of Reginald Valentino Weir created this Life Tributes page to make it easy to share your memories.

Send flowers to the Weir family.