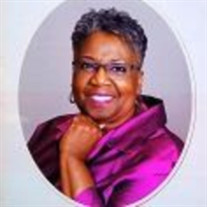 Quinseola Jones, Quincy as she was fondly called, was born on February 1, 1949 in Batesville, Mississippi. The family relocated to Evansville, Indiana when she was three years of age. Quincy was educated in the Evansville Vanderburgh County School System. She attended Chestnut Walnut, Howard Roosa and Culver Elementary School. She graduated from Bosse High School in 1967 where she was an honor student. Quincy graduated from Lockyear Business College. She completed and excelled in many higher education opportunities. Quincy began her work life at United Way. She later was employed at National City Bank, and Sigeco. Sigeco became Sigecom and later Vectren. She retired in 2011 after 38 years of service. Quincy was active very in the community. She was an original board member for Family Day In The Park, serving over 20 years. She was a member of Vectren Forum, a mentoring group for young professionals. She assisted with the race for the cure team and the Southwestern UNCF committee. She was also an active member of Mahogany 67. Quincy’s parents, Inez and Delove Jones, reared and guided her spiritually, leading her to accept Christ as her Savior at an early age. She was baptized at Line Street Church of Christ. She was a devout member of the church. She served as church secretary for over 30 years. She also participated in many ministries, including DORCAS, Benevolence and Culinary. She chaired the committee for the well-known Mother’s Day Tea. Quincy was preceded in death by son, Keith Miller, parents Delove and Inez Jones and brother Allen Jones. Quincy leaves fond memories to her son, Carlton Collins, sister Shirley Bailey (Randy), niece Jessica Bailey, bonus daughter Robin Goebel, seven aunts, one uncle, cousins, a loving church family and classmates.

Quinseola Jones, Quincy as she was fondly called, was born on February 1, 1949 in Batesville, Mississippi. The family relocated to Evansville, Indiana when she was three years of age. Quincy was educated in the Evansville Vanderburgh County... View Obituary & Service Information

The family of Ms. Quinseola "Quincy" Jones created this Life Tributes page to make it easy to share your memories.

Quinseola Jones, Quincy as she was fondly called, was born on...

Send flowers to the Jones family.