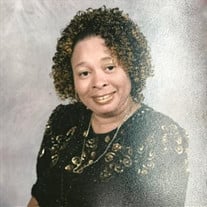 Patricia “Pat” Elaine Parker Coleman passed away peacefully on 09/25/2018 at Signature Healthcare, in Louisville, Ky. Pat was born to Nora Jane and Bennie Parker in Gary, Indiana on December 30, 1952. Pat graduated from Providence High School. She accepted Christ at an early age, and was of the Catholic faith, however Pat rededicated her life at Simpson Chapel Cumberland Presbyterian Church. Pat had been employed at RCA in Indianapolis, Indiana. Most of Pat’s life was spent as a loving homemaker who loved life to the fullest. For the past 13 years, Pat’s health had been declining and her sisters, Greta and Angela Parker, and daughters, Dominique Coleman and Savannah Johnson were her caretakers. Pat was preceded in death by her husband, Robert Coleman Sr; her father, Bennie Parker; and brother, Stephon Parker. Pat is survived by daughters: Dominique Elaine Coleman of Providence KY, Savannah Johnson (Claude Jr) of Louisville KY; mother, Nora Jane Parker of Providence KY; sisters: Angela Parker of Providence KY, Greta Parker of Henderson KY; brothers: Spencer Parker of Madisonville KY, Bishop Eric Parker (Tammy) of Owensboro KY, and Michael Parker of Providence KY; along with a host of nieces, nephews, cousins and friends. Services will be held Saturday, September 29, 2018 at 3:00pm at Simpson Chapel Cumberland Presbyterian Church, 311 Woolfolk Street, Providence KY with visitation from 1:00pm until service time at the church. Condolences may be left at www.masonbrothersfs.com

The family of Patricia Elaine Coleman created this Life Tributes page to make it easy to share your memories.

Send flowers to the Coleman family.