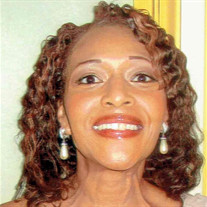 Pamela Maria (Johnson) Orton was born May 27, 1960. She was the youngest child of Clark and Betty Johnson. Her parents, two brothers (Wayne and Gregory) and sister-in-law (Pamela Irvin Johnson) preceded her in death. Pamela grew up in Evansville, Indiana and graduated from Bosse High School. She later moved to Cincinnati, Ohio. She returned to Evansville and met the love of her life. She united in holy matrimony to Clarence Orton for twenty-one years. No children were born to this union. Pamela accepted Christ at an early age and was baptized at All Saints Academy in Indianola, MS. Pamela later established her membership at Holy Trinity COGIC under the leadership of Elder Timothy Baker. Pamela was a loving mother to her children, Angela and Blake. She had an extraordinary love for her grandchildren. Pam was a Certified Nursing Assistant for over twenty years. Pam was best known for her “unique” spirit. Pam loved to shop, try various trending hair styles, and have a good laugh. She loved her siblings, in-laws, nieces, nephews, and extended family in her own “unique” way! On Friday, January 8, 2016 at around half past 9am hour, Pamela answered her Master’s call and moved from her earthly house to her heavenly home. She leaves to cherish her memories, her loving and devoted husband, Clarence; two children: Angela (Ishmael) Manyonga of Indianapolis IN, and Blake (Deborah) Burris of Evansville IN; five grandchildren: Nakai, Siyana, Xavier, Bryson, and Rylan; two sisters: B. Denise Johnson and Angela (Larry) Hay of Evansville IN; in-law: Cookie Adams, Matthew (Lenore) Orton of Columbus OH; and a host of aunts, uncles, cousins, nieces, nephews, and friends. A Home-going Celebration will be Thursday, January 14, 2016 at 11:00am at Watkins Temple GOCIG, 670 So. Governor Street at the intersection between East Mulberry and Bellemeade Avenue. Wake services will be held Wednesday, January 13, 2016 from 6:00pm – 8:00pm at Mason Brothers Memorial Chapel, Evansville. Burial in Fernwood Cemetery. Condolences may be left at www.masonbrothersfuneralservices.com.

Pamela Maria (Johnson) Orton was born May 27, 1960. She was the youngest child of Clark and Betty Johnson. Her parents, two brothers (Wayne and Gregory) and sister-in-law (Pamela Irvin Johnson) preceded her in death. Pamela grew up in Evansville,... View Obituary & Service Information

The family of Pamela Johnson Orton created this Life Tributes page to make it easy to share your memories.

Send flowers to the Orton family.