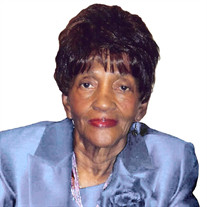 Odessa Juanita Simms, age 92, departed this life on Sunday, January 24, 2016, at 8:00 am. Odessa was born in Pembroke, KY. She was the second of three children born to Mabel and R. D. Hall. Odessa moved to Earlington, Kentucky with her family at the age of six. She joined Mt. Zion Missionary Baptist Church at an early age and was baptized under the leadership of Pastor H.B. Taylor. Odessa attended the J. W. Million School system, graduating in 1941, and attended Kentucky State University. She moved to Washington, D. C. and worked for the War Department. In 1956, she married William Simms and had several children before returning to Earlington, Kentucky. Odessa was employed at Walmart as well as the Regional Medical Center in the Food Services Department and the Billing Department. After retiring from the Regional Medical Center Billing Department in 1985, she remained active at the RMC as a volunteer. In addition, she was active in her church, in the school, and in the community. At Mt. Zion she sang in the Adult Choir as well as the Mass Choir and taught in Sunday School, B.T.U., and Vacation Bible School. She was a part of Circle # 1, the Cleo Taylor Circle, served as secretary for the Deacons’ Wives, and attended the Hopkinsville College of the Bible. She served as treasurer of the Sunday School and B.T.U. Congress, secretary of the Women’s Convention, and was a member of the Order of the Eastern Star. In the school system she served as PTA president and with Project Self Esteem at Earlington Elementary School. In the community she was a part of the committee that promoted events at the Rosenwald Smith Multi Cultural Center. Odessa was preceded in death by her husband, William Simms, and three of her sons: Edsel, William Jr., and Reginald. Her memory will live on through those who love her – Jacqueline (George) Brown of Chicago; Michael (Karen) Pettiford of Dublin, Ohio, and DeNiece Simms of Woodbridge, Virginia; her thirteen grandchildren - Kim, LaKeisha E., James, Lesha, Kwame, Felicia, Lauren, Lakeisha S., Mike E., Kerissa, Michelle, Reginald, and Demetrius. Family also includes ten great-grandchildren and five great-great along with a host of cousins, nieces, nephews, as well as friends, including the Mt. Zion Church family. Services will be held, Saturday, January 30, 2016 at 2:00pm at Mt. Zion Baptist Church in Earlington, Kentucky. Visitation will be from 1:00pm until service time. Burial will be in Oakwood Cemetery in Earlington. Mason and Sons Funeral Home is in charge of arrangements. Condolences may be left at www.masonbrothersfuneralservices.com

Odessa Juanita Simms, age 92, departed this life on Sunday, January 24, 2016, at 8:00 am. Odessa was born in Pembroke, KY. She was the second of three children born to Mabel and R. D. Hall. Odessa moved to Earlington, Kentucky with her family... View Obituary & Service Information

The family of Odessa Simms created this Life Tributes page to make it easy to share your memories.

Send flowers to the Simms family.