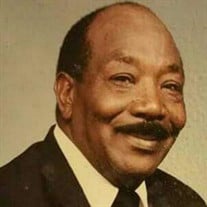 “Now FREEZE!!” When Norman Lovelace said this while dancing or when someone was acting up, everyone knew he was saying STOP dancing and PAUSE, then get right back to it or get some act right because his younger sister Nancy (whom had already went home to meet her maker) was coming to get you! Stormin Norman, a nickname given to him by family and close friends was one out of 8 siblings, whom all proceeded him in their return home; Martha Walden, Frank Lovelace, Eli Lovelace, Raymond Lovelace, Ethel Vaughn Lovelace, Ikle Lovelace, Nancy Northington Lovelace and Arthur Lovelace, who passed away as an infant. Norman also had 3 much older siblings by the names of Ida, Liz and Bulla. Norman brightened the world with his fun, stubborn, joyful spirit, storytelling, charming, joking and talented artistic ways on August 27th 1925 in Evansville, IN. We can thank his father Eli Lovelace and mother Martha Heard Lovelace for blessing many of us with the joy of having him in our lives. Norman was a God fearing man and was baptized at Nazerene Baptist Church in Evansville IN, the church in which his father Eli was a founding member. Norman graduated from Lincoln High School and later joined the US Army. When he returned home from the Army, In Evansville, where it all started, a beautiful young woman by the name of Ruby Taylor happened to catch Norman’s eye so she later became Mrs. Ruby Lovelace. Norman attended the Chicago School of Art in Chicago IL. After art school he began working at Plymouth Chrysler Corp in Evansville. Norman and Ruby would later have 5 wonderful children; Jean Lander Lovelace of Seattle WA, deceased, Barbara Lovelace of Sun City CA, deceased, Larry Lovelace (Betty Kay) of Blue Springs MO, Kimberlin Lovelace of Hemet CA, deceased and Greg Lovelace (Joy) of Grain Valley MO. When the plant moved to St. Louis, MO so did Norman and Ruby where Norman suffered a hand injury at Chrysler scaring his hand with a permanent cross but continued working until he retired as an IBM manager. Norman was blessed to have grandchildren from Jean; Debara, Leonarda and (Mark, whose life was short but never forgotten), Barbara; Charlene (Candy), Karen (PeeWee), Terri (Poopsy) and Kimberly (Nakey), Larry; Berkley, Kenta and Larry Jr and Greg; Aljay and Curston. From those grandchildren he was blessed with his great grandchildren; Sharmaine, Shareese, Jeffrey, Kevin, Jerrell, DeShawn, Brentyn, Alisha, Gabby, Jerome, Berkley Jr., James, Alexis, Trenton, Marcus, Jade, Dominique, Isaac, Breanna, Brett, Skyy, Laileah and little Kimberlin. Norman’s grandchildren blessed him with great great grandchildren; Krizeria, JaMarcus, Shamarii, Nevaeh, Niyati, Diamond, Da’lana, Aaliya, Sarai, Kaiden, Kazyn and one more on the way. Norman was a blessing and he called all his grandchildren his little buckaroo’s and all his nieces and nephews knew him as Uncle Norman. When he attended family gatherings, he made it that much more fun and interesting by playing board games and cards and telling stories and jokes. Norman laid down to sleep Sunday August 9th and woke up early Monday morning on August 10th 2015 in the Lord’s house where he joined Kimberlin, Barbara, Jean, his brother’s and sister’s, a host of family member’s and friends. He will surely be missed and forever in our hearts.

&#8220;Now FREEZE!!&#8221; When Norman Lovelace said this while dancing or when someone was acting up, everyone knew he was saying STOP dancing and PAUSE, then get right back to it or get some act right because his younger sister Nancy (whom... View Obituary & Service Information

The family of Norman Lovelace created this Life Tributes page to make it easy to share your memories.

“Now FREEZE!!” When Norman Lovelace said this while dancing or...

Send flowers to the Lovelace family.