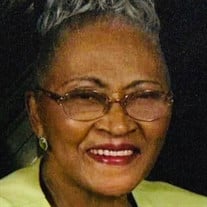 Mildred Lowell Tandy, peacefully transitioned to her eternal home on May 25, 2021 at the blessed age of 94, surrounded by her daughter and cousin. She was born on January 27, 1927 to Verna and Thomas Tandy in Sturgis Kentucky. After suffering a stroke she was brought home to be cared for by her daughter and Heart to Heart Hospice care. Mildred lost her father at a very early age in a coal mining accident, but later gained a stepfather Jobie Shelton, who also was injured in the mine but survived. Her world changed several years later when she was blessed with a baby brother who she dearly loved from the time of his arrival to her departure. After graduating from high school, she attended the Community College in Kentucky for 2 years, before moving to Evansville. She held several positions with other companies before being hired in the 70’s at Zenith where she retired in the early 90’s. She was affectionately known as “Millie” to her coworkers, “Grandma Mil” to her grands, great, and other children she helped raise in the community. Her nieces called her “Aunt Mildred” but her cousins who held her in high esteem called her “Aunt Mino.” Mildred was a servants/servant, a devoted daughter, a loving sister, mother, aunt, cousin, and friend. She had a sweet, loving, giving personality and always put others needs before her own. She had an intense love for her family and thoroughly enjoyed every aspect of providing for them: cooking, cleaning, baking, laundry and working – even in the yard. At 6:00 am she would rise to cut grass, weed, and sweep the streets until 9:00. Then she would come inside to make sure her home was spotless, clothes washed, starched and ironed, and good hot meals were ready to be devoured. Mildred accepted Christ early in her life and served Him through the family He blessed her with. She prayed constantly, and when she could no longer bend her knees, she would bow over her bed to lift those God blessed her with into His care. Mildred was preceded in death by her father Thomas Tandy, her stepfather: Jobie Shelton, her mother: Verna Shelton, and her grandson: Ranando Deon Cooksey. She leaves to cherish her memory one daughter: Zenobia Orita Cooksey, 2 great grandchildren Ranando Deon Cooksey Jr (Akiah), Casimro Cooksey and two great great grandchildren: Taura & Trinhalei; a brother: Joseph Jerome Shelton (Clara), a niece: Dawn Shelton, a great great niece, nephews, cousins and friends.

Mildred Lowell Tandy, peacefully transitioned to her eternal home on May 25, 2021 at the blessed age of 94, surrounded by her daughter and cousin. She was born on January 27, 1927 to Verna and Thomas Tandy in Sturgis Kentucky. After suffering... View Obituary & Service Information

The family of Mildred Lowell Tandy created this Life Tributes page to make it easy to share your memories.

Send flowers to the Tandy family.