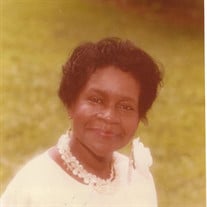 Mildred Mae Kirkwood, affectionately called “Mit,” was born April 13, 1929, in Wheatcroft, KY to the late Roosevelt and Sara Ann (Bell) Carter. She transitioned from earth to eternity on Saturday October 30, 2021. In 1945 she was united in Holy Matrimony to Samuel H. Kirkwood, Sr. and to this union eight children were born. Mae lived in Nebo, KY for many years and during that time worked at the York International Plant in Madisonville and Johnston’s Cleaners. Still, she was primarily committed to the care and nurturing of her family by being a homemaker. She was a dedicated member of Little Flock Baptist Church in Nebo, where she served in various capacities to include choir member, church secretary, treasurer, or in any other capacity requested or needed. She was also a devout member of the women’s missionary group. She loved attending church, as well as loved her pastor and her church family. Gardening was her passion, but her greatest joy was hosting birthday parties and Easter egg hunts for her beloved grandchildren. In addition to her parents, she was preceded in death by her husband, daughter: Brenda Raynell; sisters: Doris Harris, Marcelene Bell, and Jackie Beasley. She leaves to cherish her memories, her daughters: Nancy Johnson, Myrna Walton, Sherry Drone of Madisonville, Ky, and Wavetta Lewis of Easton, TX; sons: Samuel H. Kirkwood Jr. of Nortonville, Ky, Ronnie (Cecelia) Kirkwood of Sturgis, KY, and Kenneth (Cheryl) Kirkwood of RAF Mildenhall Air Force Base, Suffolk, England; sisters: Shirley Burks, and Lendola Minor of Indianapolis, IN and Linda Steppe of Madisonville, KY; brothers: Robert R. Carter, Sr., of Madisonville, KY and Arneuwell (Doris) Benifield Jr. of Stone Mountain, GA; 17 grandchildren and a host of great-grandchildren, nieces, nephews, cousins, friends, and church family.

The family of Mildred "Mit" Mae Kirkwood created this Life Tributes page to make it easy to share your memories.

Send flowers to the Kirkwood family.