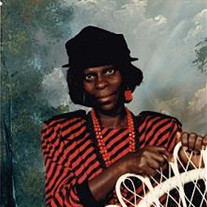 A time to be born: Mattie Elizabeth Gant was born January 3, 1935 in Henderson County to Ben C. Gant, Sr. and Pauline Carter Gant. A time to build: Mattie was baptized at a young age at Race Creek Baptist Church and later joined Seventh Street Baptist Church. A lover of gospel music, she sang in the choir at both churches. Mattie was a good and faithful servant to the Lord. A time to love: Mattie was a loving and doting daughter, mother, sister, aunt, grandmother, great grandmother, great-great grandmother, cousin and friend to all who knew her. She was a homemaker her entire life and created a loving and caring home environment. Mattie enjoyed volunteering at the New Place and loved waking and riding throughout the city. Henderson knew her as the “Queen of the Blues Festival”. In the early 1980’s, Mattie saved her companion from a fire that consumed his trailer. She walked through fire, without regard to her own safety, receiving severe burns. All the news journalists visited her, brought her gifts and interviewed her on the evening news. The Gleaner recognized Mattie and called her a local hometown hero. Her bravery was also demonstrated in her battle with breast cancer from which she became an 18 year survivor. A time of peace: Mattie answered the Good Lord’s call to come home on September 22, 2015 with her loving family by her side. It was a peaceful death. A time to cherish and rejoice: She was preceded in death by her parents, son Leroy Gant whom she adored; siblings: James Ray, Ben C. Gant, Jr., John Gant, Bertha Louise Gant, Jimmie Lee Ware, Jackie Easley, and Delores Gant; son-in-law David Burton, her great-great granddaughter, Mya Carter Wiley, and longtime companion Leroy Thomas. She is survived by children: Irene Burton, Robert Gant, Hollis Gant (Debbie), Nicole Foreman (Joe); grandchildren: Tresa Rucker, Edgreana Hamm, David Wiley, Koty Gant, Jessica Gant, Megan Gant, Antonio Gant; great-grandchildren:Kashia Blanks, Morgan Blanks, True Rucker, Devin arter, Jalayah Gant, Anayshia Goins; great-great-grandchildren: Amauri Tapp, Brihlyn Blanks, Zylan Currington. Sisters: Ervinia Gant, Pearline Gant; a host of nieces, nephews, cousins and friends.

The family of Mattie Elizabeth Gant created this Life Tributes page to make it easy to share your memories.

A time to be born:
Mattie Elizabeth Gant was born January 3,...

Send flowers to the Gant family.