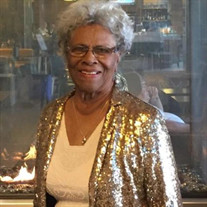 Mary Agnes Mayes Moore was born August 10, 1930, to proud parents Estella Australia Hopson Mayes and Frank Willis Mayes, Sr., in Evansville, IN. Mary, Mom, Mama, Aunt Mary, Grandmama, Sis...and eventually Nana by her great-grandchildren...were all the loving names called to her by those who loved her most. Mary A. Mayes Moore departed this life on July 29, 2020, at 11:27p.m. Her beloved and faithful grandson, Robert (Robbie) Moore, was near her, and lovingly stayed with her, until her last breath. Others in her family were there in spirit and through prayer. God was her best friend, and He held her tightly in His arms, so that she was not alone. Mary was a student of The Word. She loved teaching her Bible Study class on Wednesdays, where she would hold the members captive, and in awe of her understanding of scripture. She often confided in them her personal life stories, and encouraged them to find scriptural application for their own lives. Colleen, Collette, Lois, Jane, Don, Lucian, and Ra’Shawn...she loved you. Mary was baptized and began her worship and spiritual leadership training at Grace Lutheran Church in Evansville. She was a member of the Semper Fidelis Circle, through which she served her church and the community. She was a Sunday School teacher for many years and enjoyed preparing her lessons each week. The children loved her. She was also an active member of the Adult Choir, led by Joselyn Fields, and sang a very high soprano on all the Introits and Graduals. Her voice soared like the eagles, with perfect natural pitch. Oh, how she loved to sing, and her younger self had dreams of the Opera, which her granddaughter, DeVonna achieved for her. They enjoyed singing together, and she did not miss an Opera! The Sounds of Grace Choir, which began in 1977, became Mary’s opportunity to help lead the organization with her promotional skills, as she diligently set up beautiful displays for the choir’s recordings. She chose her team, which included her cousin, Gloria Ferguson, who was her cohort in life. They were like sisters, just as their mothers were, Stella and Marie. Mary had many, many gifts, but her gift of writing brought her the most joy. From creating stories about her ancestors as she researched her family’s genealogy, to authoring and publishing a book of poems called, “Treasured Pleasures”. Last year, friends and family gathered to listen as she read her work. At age 89, she was poised, engaging, humorous and brilliant. Her light will never be dimmed. She was sorely loved by you, and she loved each of you right back...unconditionally. Mary A. Mayes Moore, you are sorely missed. On November 23, 1949, Mary married her high school sweetheart, “one of those handsome twins”, Herman Robert Moore, Sr. They remained together until he departed this earthly life for his heavenly home on July 12, 2004. Born of that union were four children. Mary called them her Roses: Herman “Buddy” Moore, Jr., of Evansville; Cheryl Moore Lawrence (Phil) of California; Wendy Lorita Moore Horne of Evansville, and Timothy Eric Moore (deceased). Then, the Roses produced little Buds...grandchildren: Roxanne Moore and Faye Thompson; great-grandchild, Giselle Potts; grandson Robert Moore, wife Jessica and their children, Alana and Gabrielle; grandchildren DeVonna Lawrence, DeMorrio Lawrence, Philip Lawrence II, and wife Urbana Chapa Lawrence and their children Zadeh, Zaima, Zahlia, and Zeppelin; granddaughter Raven Lawrence; grandson Shane Lawrence and wife LeKenya Lawrence and their daughter Ke’Ayra; granddaughter Cher’Rita Horne and her daughter Aria Marie Horne. In Heaven, Mary will join with her husband, Herman; her son, Tim Moore; her mother, Estella Hopson Mayes; her aunt Marie Hopson Landers; her brother, Donald Hopson; her father, Frank Willis Mayes, Sr. and his daughter-in-law, Gerry; her stepmother, Altavia Mayes; her brother-in-law Herschel Moore, Sr., her husband’s twin; and a host of other loved ones who have gone before her. Along with her children, grandchildren and great grandchildren, Mary leaves many to cherish memories of her, including her brother, Frank Mayes, Jr., of New York, his daughter Gina Mayes and her children Robin and Robert (RJ); her brother Maurice E Mayes, his wife Rachel Bolden Mayes, and their children and families: Eric Mayes and wife, Sequitta Mayes and their son Jonathan; Mauricos Mayes; Julia Mayes Diaz, and her children, David Diaz, Madeline Diaz, Joel Diaz, Danny Diaz, Elizabeth Diaz, Marcial Diaz; Maurice Mayes, Jr., and wife Stacey Mayes, and children Sophia, Maurice Mayes III and Marcos Mayes II; Marcos Mayes I and Miranda Tucker; her sister-in-law, Doris Moore, and children Herschel Moore, Jr. (Skippy); Joan Moore and her children Catherine and Reginald; Gina Moore and husband Joe Thompson and family; Marshall Moore and wife Cynthia; Mark Moore; her dear Stamps cousins of St. Louis...oh how she loved you; and dear cousins, the Moore, Mimms, and Taliefero Families; and the Gloria Ferguson family, whom she was also especially close to and loved dearly; as well as Callie Rogers her life-long friend. There will be no in-person gathering. The service will be streamlining live on Facebook Live and YouTube at 10:00 a.m. Sunday August 9, 2020. https://www.facebook.com/pg/GracePeaceLutheranEvansville/videos/ https://www.youtube.com/channel/UCnBTPlxUALJTwdEvAdvg5g/ In lieu of flowers, donations may be made to Grace and Peace Lutheran Church. R. Mason Brothers Memorial Chapel is entrusted with arrangements. Burial in Oak Hill Cemetery. Leave condolences at www.masonbrothersfs.com.

The family of Mary Agnes Mayes Moore created this Life Tributes page to make it easy to share your memories.

Send flowers to the Moore family.