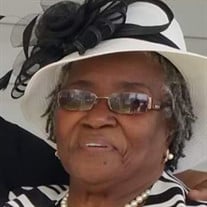 Marjorie Demps was the fourth of six children born to JD and Mamie Demps on June 27, 1939 in Quitman, Georgia. She was ushered into the very presence of the Lord, March 28, 2021, while in the care of Deaconess Hospital. In 1955, JD and Mamie moved their family to Homestead, Florida. Mama received her primary and partial secondary education in the Lowdnes County, Georgia School system. Mom was determined to complete her education and graduated with her GED at 44 years of age. What an inspiration she was for us! Mama was saved and baptized at Sweetfield Baptist Church in Quitman as a young girl. After migrating north to Owensboro, Kentucky, Marjorie united with Center Street Baptist Church. In 1976, Mom moved us further north to Evansville, Indiana where she became a member of New Hope Baptist Church after her daughter joined. At New Hope she served on the Usher Board, the Mother’s Board, and was an avid Sunday School attendee. As a single mother, she raised three unique children – Willie “Pete” Williams, Leonardo “Len” Harris, and Ava Renae Demps! From an early age, Mama was a hard worker - picking cotton, tobacco and beans as well as cooking for the family. She also performed domestic work for many families. Mama taught us how to be business minded – she was the co-proprietor of Jim’s Cleaners located at the corner of Bellemeade and Governor in Evansville and longed to own and operate a restaurant of her own. That dream came to fruition through her daughter who opened Mary and Martha’s Tea Room in 2012. Mama was also the Co-Owner of Helmar Beauty Salon in Homestead, FL for several years. God gifted Nana’s hands to do many things including: sewing, upholstering, hair styling, and fishing; but above all---she could SURELY cook! Her trademark homemade rolls, cakes, pies, candies, potato salad, greens, BBQ, and souse will CERTAINLY be missed by the many who have ever eaten at her table. Marjorie was a self-taught Master Chef in her own right. Meeting her in Glory are Marjorie’s parents: JD and Mamie; siblings: JL Demps, Tommie Lee Demps, Mary Elizabeth Demps; and grandson Kemuel Demps. Her legacy will continue through her sons: Willie “Pete” Williams (Sherri) of Evansville, Leonardo “Len” Harris of Oahu, HI ; daughter: Ava Renae Demps of Evansville; sister: Mary Ellen Mays of Owensboro, KY; brother: Bennie Demps, Sr. of Florida; grandchildren: Peter Williams, Justin Williams, Kimberly Janine McNary (Brandon), Aisha Remi Lia Campbell (Orlando); great grandchildren: Alai’ja Williams, Khandrel Perry, Justin Williams, Jr., Kaleb McNary, Jakaila Williams, Kimiyah McNary, Kamani and Kai Campbell, Ivy Williams; sister in-law: Sena Bell; and many nieces, nephews, cousins, and friends. Last but not least, Mr. Duke Demps – Nana’s fur baby!

Marjorie Demps was the fourth of six children born to JD and Mamie Demps on June 27, 1939 in Quitman, Georgia. She was ushered into the very presence of the Lord, March 28, 2021, while in the care of Deaconess Hospital. In 1955, JD and Mamie... View Obituary & Service Information

The family of Marjorie Demps created this Life Tributes page to make it easy to share your memories.

Marjorie Demps was the fourth of six children born to JD and...

Send flowers to the Demps family.