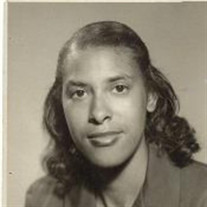 Margaret Evelyn Robinson on her 96th Birthday, went peacefully home to Glory with family present on February 25, 2022, at the Linda E. White Hospice Home. She was born February 25, 1926, in Greenville Kentucky into the large family of William and Ethel (Saulsberry) Robinson. She was the 9th of their 12 children. At the age of 10, she went to live with and assist Odie Robinson who was her mother's closest friend and her father's cousin. Soon, after that, her mother passed away. Later in life, Margaret took the position of caregiver for Odie, whom she called Mama until her passing in 1975. Odie and Margaret's home was always open to Ethel's children and grandchildren. They took in her sister Eva, which enabled Eva to complete her high school education and to go on to receive her Bachelor's degree at TA and I State University (TSU). There they attended college together and received their degrees the same year. Later they took in Margaret's sister Rowena (Christie) Stewart’s children, Jacqueline and Christopher when Rowena was hospitalized with tuberculosis. The Stewarts were extremely grateful and devoted to her for the rest of their lives. Margaret graduated from Greenville Training School, Drakesboro High School in 1947, and Tennessee A & I State University, in the summer quarter of 1954 with a Bachelor of Science Degree in History. She also held a certificate from the IU Division of Continuing Education Indiana Activity Directors Association 1975. Margaret held various occupations during her life; Odie and Margaret owned the Robinson Laundry. After college, she took on several long-term substitute teaching assignments in Muhlenberg County Segregated Training School System. She and Odie moved to Evansville Indiana in 1955 to be near the Stewart children. Because of the lack of opportunity for Black people to obtain professional positions, she took jobs as a babysitter and cleaned homes to support her and Odie. In the 1960s she obtained work through President Lyndon B Johnson's War on Poverty program at CAPE of Evansville in the Oakdale Sweetser neighborhood. There she instructed women in home economics skills such as sewing, maintaining, and decorating their homes. Through CAPE daycare and youth programs under her tutelage, Margaret became familiar with the children and the older youth of the community When the CAPE closed, she worked at the McCurdy Residential Care /Medco as an activity director on the fifth floor for the special needs residents. Margaret retired in 1991. After retiring she volunteered at Zion Missionary Baptist Church Daycare. Margaret was a member of Zion Baptist Church for 67 years. In her earlier years at Zion, she worked with the youth directing Christmas and Easter programs and other youth events. She was always very good at managing children and had a special place in her heart for babies and preschoolers. She loved purchasing outfits for all the newborns and providing the neighborhood children with popsicles. She called all little ones angels. She was also good with the elderly as she dutifully spent many days a week accompanying her oldest sister Mary Bard. She was an avid gardener growing fruit, vegetables, flowers, and houseplants. She canned and dried fruits and made jellies and preserves to share with others. She loved to read novels and play board games with the neighborhood children and watch WWF wrestling. Preceding her in death besides her parents and guardian, were her sisters and brothers: Mary (Arthur) Bard, Elizabeth (Bob) Morgan, Clarence (Pauline) Robinson, Peyton (Gladys Ruthene) Robinson, James Elmer (Dorothy) Robinson, Virginia Pitts, Rowena (Christie) Stewart, Lilly Rose (Ernest Sr) Jones, Eva (Thomas) Dumas, Elsie Robinson, and a sister-in-law who was like a sister Dorothy Robinson; two deceased attentive nephews: Ronald Bard her handyman & appliance fixer, and her beloved nephew and errand-runner Christopher Stewart; nieces and nephews; Mary Helen Bard, James Bard, William Morgan, Demetra Morgan, James Elmer Robinson Jr., Donnie Robinson, Sandra Faye McIntyre, Eugene Phelps, Kenneth Jones, Edward Dwight Jones. She leaves to mourn her, her brother: William (Queenetta deceased) Robinson of Louisville Kentucky; an extremely attentive and dutiful niece: Vivian Robinson and her twin and helper Valerie; niece and loyal lifetime supporter: Jacqueline Stewart-Glass; legal counsel and adviser nephew: Thomas Bard; her concerned and caring nephew: Gregory Pitts, designated person of care during her nursing home years; great-nephew: David Burton, handyman; along with many more loving nieces and nephews: Robert Bard, Clyde Morgan, Leatrice Irvin, Rapina Robinson, Dabbi McCray, Lynn Nora Sterling, Gladys Ware, Jewell Wallace, Ernest L. Jones Jr., Jana Jones, Ethel King, Frances Dumas-Hines, Diana Dumas, Crystal Robinson, Cherylonda Fitzgerald, Billy Robinson; 57 Great and many Great-Great Nieces and Nephews; Godchildren: Suzanne Glass-Foster, Ronald, Janelle, and Nicholas Glass; the children of Cousin Doris Mae (Allison) McGregor; cousins; the former children: of the 1700 block of South Elliott Street, of the Oakdale Sweetser neighborhood, of Zion Baptist Daycare and of Zion Baptist Church and many friends. Special thanks to ICU Nurse Jessica and the 3rd Floor 3600 Wing Nurses of Deaconess Midtown, and for the exceptional care, love, and service that was given at the Linda E. White Hospice Home by all of the Nurses and Staff of this superb facility. A mask is required for both services. Service will be live stream @ Zion Missionary Baptist Church Facebook page. Send Memorial Donations to: https://www.tnstate.edu/supporttsu/ or https://epay.tnstate.edu/C20204_ustores/web/product_detail.jsp?PRODUCTID=58&SINGLESTORE=true

Margaret Evelyn Robinson on her 96th Birthday, went peacefully home to Glory with family present on February 25, 2022, at the Linda E. White Hospice Home. She was born February 25, 1926, in Greenville Kentucky into the large family of William... View Obituary & Service Information

The family of Margaret Robinson created this Life Tributes page to make it easy to share your memories.

Send flowers to the Robinson family.