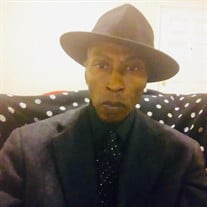 Lynn Dorsie Burns (Aka Linnie, Uncle Linnie, Mr. Burns, Brother Burns, Chi-Town, OG) was born on June 14, 1958 in Chicago, IL to his blessed parents Jeff Burns and Christine Burns Ford. At age 17, he enlisted in the US Army and held the rank of Corporal at Ft. Lewis in Washington State. In his younger years, Lynn developed a keen sense of fashion and was known for how “Kool” he was and how sharp he dressed! And, after receiving an honorable discharge, he decided to go into the Fashion Industry and studied to become a tailor. His work was impeccable and his pieces were done with immaculate precision and detail. They were frequently paraded in highly coveted fashion shows. Shortly after, he married, and became the proud father of 4 beautiful daughters whom he loved and protected. He simultaneously owned and operated businesses with his loving and supportive wife of 13 years, Laura Burns. And when his godmother, Ulessa Randolph, introduced him to the real estate business, he became passionate about that as well and began to buy, sell, and rent out properties. As a resident of the Englewood area of Chicago, Lynn was appointed Precinct Captain for the Alderman. He was a well-respected leader in other communities and influential circles, as well. He would fight against the injustices that he saw and demanded the respect he believed he deserved for himself and strangers. In 2004, he relocated to Southern Indiana near Kentucky. There, his skilled hands helped him to make a career change when he went into construction. His craftsmanship can be found in homes, buildings, and churches all across the tristate. He spent his time not only remodeling and building structures, but relationships with some of the most powerful people in the area and was a part of many City Initiatives to help families and Veterans. He took time to serve and speak up for his fellow veterans, people of color, the underserved and disenfranchised. He could often be seen being interviewed on the nightly news and sharing his strong opinions about different issues within the city. He was a dear friend and lover of all. He would voluntarily help anyone that he could. He could always be found trying to share his vast knowledge and experiences with someone. It was important to him to teach all that he could and spend as much time as he could with the people he loved and would often hug them and tell them. In 2014, he completed his degree in Social Work. In 2015, he became a founding member of Freedom Life Outreach Ministries where he was pastored by his son-in-law and youngest daughter, Dawoyne and Lisandria Robertson. He would share his testimony of God’s favor in his life and made it his top priority to “win souls” for Christ and encouraged others to do the same! In 2018, He began working towards becoming a Life Skills Coach and Marriage Counselor. He also met the new love of his life, Angela Grant of London, England, UK. He spoke of her to all he loved. Early 2019 they had begun to arrange things for him to move to London and then Paris, France to marry in 2020 and to pick up where he had left off with his career in the Fashion Industry. Linnie transitioned on July 16, 2019, before being able to meet with Angela, but he will always live in her heart and through the lives of all he touched. His memory will not be forgotten by those who knew and loved him and his laugh will remain immortal. Those Who Preceded Lynn in Death Father- Jeff Sisters- Joann, Cammie, and Patricia Uncles- Elisha, Frank Brittmon, Frank Burns Godmother-Ulessa Left to Carry his Memories and Legacy Children- Lynnita, Joann(Derek), Chrislynn(Donald), and Lisandria(Dawoyne) Parents- Christine Ford, Cleveland Ford Siblings- Anthony, Sr., Jeffrey, Algene, Joel, Lisa, and Jimmy Grandchildren- Raheem, Ahmad, Kennedy, Autumn, Jayton Hannah, Zion, Joel, Titus, De’Lynn, Ariyah, Malakhai, and Harmony Nieces & Nephews- Patrice, Andrea, Bianca, Lela, Anthony, Jr., Binecia, Toniko, Demitrius, Antoine, Angelo, Samuel, Lorinia, Lecedrick and their significant others Aunts & Uncles- Dorothy (sister of Jeff Burns), Dorthy, James, Anne, Burlin, Verlene, Charles (Uncle Gene), Lenora, Marie, Helen, Caroline, and their significant others God-sister, brother, and nephew- Zona, Kelso(Bill) Randolph, Kelso (Little Bill) Randolph, Jr. a host of other family, friends, loved ones, 3 special little girls who reminded him of his daughters And one amazing fiancé Angela Grant

Lynn Dorsie Burns (Aka Linnie, Uncle Linnie, Mr. Burns, Brother Burns, Chi-Town, OG) was born on June 14, 1958 in Chicago, IL to his blessed parents Jeff Burns and Christine Burns Ford. At age 17, he enlisted in the US Army and held the rank... View Obituary & Service Information

The family of Lynn Dorsie Burns created this Life Tributes page to make it easy to share your memories.

Send flowers to the Burns family.