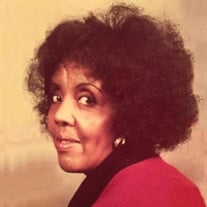 Louise “Gervine” McCampbell, age 83, passed away Wednesday, August 10, 2016 at Green Acres Healthcare in Mayfield KY. Gervine was born on June 5, 1933 to Annie and Berthel McCampbell in Hickory, Kentucky. After her mother’s and father’s death, she was reared by her grandparents, the late Dave and Hattie McCampbell. Gervine had one son, Ricky N. Dale (Lorie Ann Dale) of Versailles, Kentucky. She was the sibling of four sisters: Marthel Bills, Margaret Ann McCampbell, Carolyn Haskins - all of Mayfield, and Flora Martin of California; and two brothers, Will Davis McCampbell and Sam Dawson who both preceded her in death. She was the grandmother of five: Felicia Saxton of Newbern TN, Felicity Taylor of Louisville KY and Ryan, Teja and Tana Dale of Versailles KY. She was the great-grandmother of nine. Among her nieces were two who cared for her and never left her side, Nora Ann Isbell and Martha Jean Herman. She also had several other nieces, nephews, cousins and relatives. Gervine was a faithful and loyal member of the Lee Street Church of Christ, Mayfield, Kentucky. She was employed formerly at Kennedy Tobacco Company, Holiday Inn and Dillon Manufacturing. All of those who knew her will remember her friendly demeanor and outgoing and loving personality. She had a smile for everyone. She will truly be missed. Services will be held Tuesday, August 16, 2016 at 1:00pm at Lee Street Church of Christ in Mayfield KY with visitation from 11:00am until service time also at the church. Burial in Oak Rest Cemetery. Mason Memorial Chapel is in charge of arrangements. Condolences may be left at www.masonbrothersfs.com

The family of Louise Gervine McCampbell created this Life Tributes page to make it easy to share your memories.

Send flowers to the McCampbell family.