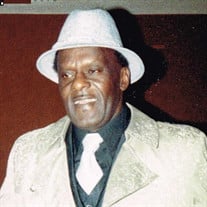 Lewis Pace, Jr. also known as “Flash” , was born April 7, 1927 in Montgomery County, Tennessee to the late Lewis Pace Sr. and Leora Mallory Pace. He went home to be with the Lord on March 7, 2017 at the age of 89 years old. He was preceded in death by his first wife: Iona Johnson Pace; son: William Chestnut; brother: Alexander Pace; sisters: Ora Pearl Pace Dinkins, Carrie Pace Ogburn, Maxine Pace Medley. He was baptized at an early age in the Hampton Station Tennessee area where he grew up and received his education. After leaving school, he began work on the Dan Hamilton Farm Clarksville, Tennessee where he remained until he moved to Evansville. He went to Truck Driving School and obtained his CDL license to become employed by Conway Express/CSX Trucking Company where he got name “Flash”. He retired from there after 20 years of service. After retirement, he worked as a security guard at the Evansville Museum of Arts and Science until his prevented him from doing so. Lewis was a loving husband, father, brother, uncle, and grandfather. All who knew him, loved him. He loved to fish, hunt and just ‘hang out’ with his two brothers and spend time with family and friends. He leaves to forever cherish his memory, his wife Natalie Pace; sons: James L. Pace of Indianapolis, Larry Pace (Jimmie Lee) of Evansville, Lewis Pace III of Indianapolis, Dewayne Pace of Oklahoma, Mark Pace of Evansville, Galen Tramil, Daunt’e Butler, DeMarcus Butler all of Evansville; daughters: Vicki Pace, Sandra Pace, Ginger Pace all of Clarksville, Marvel Marks of Augusta, GA; brothers: James Willis Pace, Elmo Pace both of Evansville; 100+ grandchildren, 100 plus great grandchildren, and many many great- great grandchildren whom he loved dearly. He will also be missed by a host of nieces, nephews, other relatives and friends and a special “daughter” Iona Grant.

The family of Lewis Pace Jr. created this Life Tributes page to make it easy to share your memories.

Send flowers to the Pace family.