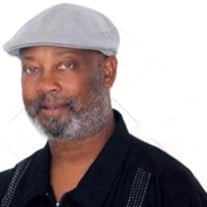 Leonard Ervin Johnson was born to Leonard Jackson Johnson and the late Martha Louise Johnson on September 11th, 1958. He departed this life on November 17th, 2020 at the age of 62 in his home in Henderson, KY. Ervin attended Henderson County Schools and graduated from Henderson City High School in 1976. He attended Western Kentucky University in Bowling Green, KY. He went on to work for the Accuride corporation for 15 years, and later for Tyson Chicken corporation. Although his career was spent mainly on the assembly line, friends and family would tell you that his calling was at the grill and the smoker. Ervin was long known as the man to go to in the community for high quality barbecue. Ervin professed his faith in Christ at an early age and joined the Greater Norris Chapel Baptist Church. He served on the usher board from the time he was a young adult, sang in the choir, and served as church custodian and grounds keeper for over 20 years. Over the years, he contributed to his faith community in various ways from driving the church bus to providing his culinary expertise for church dinners. Ervin was an active member of his community. He was a member of the Elk’s lodge. He participated in community events such as Dust Bowl, Tri-fest, the little Sturgis rally, and more, normally providing high quality barbecue at a reasonable price for such events. And many young men in the community will tell you that they have benefited from his mentorship over the years. Ervin was united in holy matrimony to Priscilla Skinner Johnson on September 5th, 1987. Ervin and Priscilla leaned on each other through life’ storms, through sickness and health, in good times and bad, and their union persisted 33 years to his death. Ervin is preceded in death by his mother, Martha Louise Johnson, and his sister, Lucy Jones, and a cousin who was like a brother, Dudley Johnson. He leaves to cherish his memory his wife, Priscilla Johnson; father, Leonard J Johnson; two sisters: Denise (Ricky) Hookfin and April R. Johnson; seven children: Ja’mese Bibbs, Tony (Tywana) Skinner, Ervin (Alissa) Miller, Myron Hodge, Leonard B. (Lindsey) Johnson, Jeremy Bibbs, Francesca (Zack Walker) Floyd, and an eldest grandchild who was like a daughter: Jade Skinner; seventeen grandchildren; a cousin who was like a brother, Clarence Calhoun; a special niece, Aleka Hawes; mother-in-law, Eva Sue Skinner; six sister-in-laws; as well as a host of nephews, nieces, cousins and sorrowing friends. Our family has suffered a heavy blow. We thank everyone who has shown us their love and support. As we prepare to celebrate Ervin’s homegoing, our grief is complicated by the need to take all prudent precautions for Covid. For everyone who wishes to pay their respects, we are having a walk-through visitation on Sunday, November 22,2020 from 2:30pm-5:00pm at Love Temple Church of God in Christ. The graveside service will be on Monday, November 23, 2020 at 12:00 pm, and the ceremony will be livestream on Mason Brothers Funeral Home Facebook page. We appreciate all of your support. We know that you grieve with us, and though we can’t all be together right now, we are together in spirit. Mason Brothers Audubon Chapel is entrusted with final arrangements; Leave condolences at www.masonbrothersfs.com. Due to Kentucky laws regarding Covid-19, no more than 25 attendees will be permitted in the building at one time for funerals and visitations. A mask must be worn at all services and social distancing will be observed.

Leonard Ervin Johnson was born to Leonard Jackson Johnson and the late Martha Louise Johnson on September 11th, 1958. He departed this life on November 17th, 2020 at the age of 62 in his home in Henderson, KY. Ervin attended Henderson County... View Obituary & Service Information

The family of Leonard "Ervin" Johnson created this Life Tributes page to make it easy to share your memories.

Leonard Ervin Johnson was born to Leonard Jackson Johnson and...