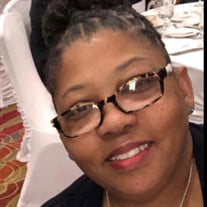 Deaconess Kimberly Michelle (Claybourne) Millender, 64, of Evansville, IN, transitioned on March 24, 2022. Kimberly was born, August, 31 1957, to the union of the late educators and coaches, Edward Preston Claybourne and Earnestine Crawford Claybourne. Kimberly accepted Christ at an early age and attended her family’s place of worship, Alexander A.M.E. Church of Evansville. Educationally, Kimberly graduated from Benjamin Bosse High School, Class of 1975. Upon completion of high school, Kim enrolled at Indiana University – Bloomington where she studied Criminal Justice. The faith community was blessed by Kimberly’s labor. She united with Zion Missionary Baptist church in 1991, where she became an active learner of the Bible and worker in God’s vineyard. At Zion, Kim served as a Sunday School teacher, the church librarian, youth leader, and a regular delegate of the National Baptist Congress of Christian Education, USA, Inc. Later (2005), Kimberly united with McFarland Missionary Baptist Church. At McFarland, Kimberly served in and led many ministries. She served as the church clerk, committed choir member, and a dedicated Deaconess. Kimberly used her gifts to faithfully work in the Southern Indiana Missionary Baptist District Association as chair of the Three Big Sisters mission group. In her community Kimberly gave of herself, time, and resources to such organizations as the Evansville African American Museum (secretary), countless homeless and women’s shelters, and food pantries while working a full-time job. Kimberly advocated for “the least of these” and worked until the day was done. Professionally, Kimberly worked for Albion Fellows Bacon Center, Lazarus, and the United States Postal Service where she retired in 2018 after 30 years of employment. Kimberly and Robert Millender were married and birthed one child in their union, Ayriane Millender. She faithfully spent time with her immediate family in her retirement and demonstrated her love for them every chance she could. She leaves her cherished family whom she adored: one loving daughter Ayriane and one loving grandson, Jeffrey, two sisters Karen (Walter), Kaye, two brothers James and Kenneth (Stacey), three nephews, Joshua, Davíd, Nathan; nieces Tracey, Kim, and Kayla, two grand nephews, De’Angelo and Montrae and a beautiful grand niece, Iesha; and first cousins, who are also like siblings, Kerwyn, Kevin, Keenan, Kiva, Kecia, and Kortez. From our family, we sincerely thank you for every and heartfelt concern.

The family of Kimberly Millender created this Life Tributes page to make it easy to share your memories.

Send flowers to the Millender family.