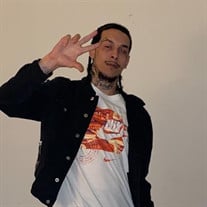 Keshon Leigh Hensley born on June 23, 1997 in Evansville, Indiana. He passed away on Sunday, March 14, 2021 at the age of 23. He enjoyed dancing, rapping, taking pictures and playing video games like GTA. He also enjoyed playing and watching... View Obituary & Service Information

The family of Keshon Hensley created this Life Tributes page to make it easy to share your memories.

Send flowers to the Hensley family.