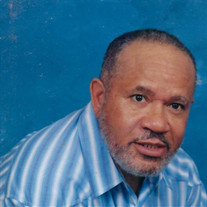 Our beloved Kenneth Lee Johnson was born Dec. 19, 1947 to Harvey Johnson and Robbie Lee Blythe Johnson. He gained his heavenly wings on Jan. 13, 2017 at Vanderbilt University Medical Center. He was a graduate of Mayfield High School and West... View Obituary & Service Information

The family of Kenneth Lee Johnson created this Life Tributes page to make it easy to share your memories.