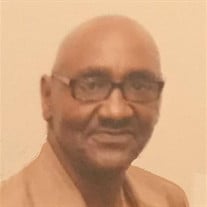 On October 13, 1947 the union of Archie B. (Lindsay) and L.E. Berry was blessed with their fourth son Kenneth Ray Berry. Kenny graduated from Roosevelt High School. He was Honorably Discharged from the United States Army after serving in Vietnam... View Obituary & Service Information

The family of Kenneth Ray Berry Sr. created this Life Tributes page to make it easy to share your memories.

Send flowers to the Berry family.