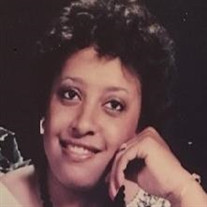 Juanita Rowena Britt was born on September 27, 1960 in Smiths Grove, KY to the union of the late Amos and Bertha Boards Britt. Nita, as she was fondly called by her family and friends, was the "baby" of Amos' and Bertha's three children. Her other siblings were Wallace Grainger (deceased) and Beverly Elaine. On June 3, 2017, Nita transitioned from her earthly home to her eternal resting place with the Lord. Nita accepted Jesus Christ as her Savior at age twelve and united with the Pleasant View Baptist Church, Smith's Grove, KY, where she remained a member until her death. She was active in her church where she served as the Sunday School secretary, member of the Usher Board and of the choir. She also enjoyed planning special events such as the annual Easter program and the Annual Homecoming Celebration. She was a graduate of Western Kentucky University, Bowling Green, KY where she earned a Bachelor of Arts degree in English. She later matriculated to Western again and earned her Master's degree in Education and certification as a Principal and in Supervision. Her employment experience included 15 years as a teacher in the Bowling Green Independent School System. While there she was appointed by the governor to represent all of Kentucky's teachers on the Professional Standards Board; was a curriculum and assessment consultant, serving thirty-three school districts for the Kentucky Department of Education; and was a quality and training consultant for AFNI (an outsourcing company). She then moved to Madisonville and was employed by the City of Madisonville as the Director of the Larry Carney Center. She also served as the Executive Director of the Minority Economic Development Council (MEDC). Juanita was a Kentucky Colonel and very ably served on many boards and organizations on the local, state, and national level. She always strived for excellence in anything she undertook. She was preceded in death by two "special sisters", Mrs. Sharon Dean and Dr. Sylvia Bivens. She is survived by her sister, Beverly E. Britt, Madisonville, and a host of cousins and friends.

Juanita Rowena Britt was born on September 27, 1960 in Smiths Grove, KY to the union of the late Amos and Bertha Boards Britt. Nita, as she was fondly called by her family and friends, was the "baby" of Amos' and Bertha's three children. Her... View Obituary & Service Information

The family of Juanita Rowena Britt created this Life Tributes page to make it easy to share your memories.

Send flowers to the Britt family.