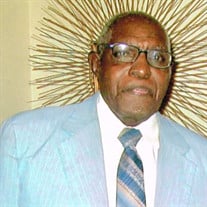 “Blessed are the dead who die in the Lord for they shall rest from their labors and their works do follow them.” With the wind beneath his wings, John Henry “Roosevelt” Carson, age77, left this world on Tuesday, August 11, 2015 at Deaconess Hospital to begin his eternal life with the Lord. John was born on October 10, 1937 in Sharon, Mississippi. He was the son of Allen and Mandy (Ross) Carson who preceded him in death. He was also preceded in death by his wife of 56 years, Doris Irene (Fisher) Carson, brother, Sylvester Johnson, granddaughter, Charlotte McGowan and grandson, Allen Lee Hawkins. John was educated in the Evansville Vanderburgh School System. He was employed for many years as a construction laborer until his health forced him to retire. John loved the Lord and loved working and attending church services as a member of Line Street Church of Christ. He was a kind and gentle man who was loved and respected by all. John was an avid collector of old currency including coins and paper money. He also enjoyed fishing hunting, gardening, and cooking. He was known for his signature homemade barbeque sauce and potato salad. John cooked every holiday and what a spread he would lay out. He enjoyed watching his Monday night football and old western movies. He made sure to attend all his son, Leroy’s high school football games at Bosse and his grandson, Carl Hill’s high school football games at Castle. John loved to travel with his daughter Mandy who was always by his side. His youngest daughter, Rhoda was the love of his life; she was his fishing buddy and worm digger. John and his cousin Tommie Lou Jessup, with whom he had a very special relationship, loved to sit on the banks of the water fishing and reminiscing about their days in Mississippi. He loved spending quality time with all of his children. John was a Chevy man. He drove nothing but Chevys. He loved driving his beloved Chevy truck until his health would no longer allow him to drive, at which time his oldest son, Andrew would drive him around. John leaves to cherish fond memories, his loving children: Andrew, Leroy, Mandy, Susan, Angel, Debra and Rhoda Carson. His Grandchildren: Marcus Carson, Brett Hawkins, Andrea Hawkins, Melvin “Scooter” Carson, Melissa Coit, Travis Lee Carson-Lambert, Alicia Ann Njie-Johnson, Robert Hawkins, Jr., Angela Dawn Hawkins, Andre’ Duane Hawkins and Carl C. Hill; 44 Great-grandchildren and one Great-great grandchild; sisters Susie Mae Johnson of Milwaukee, WI, Virginia Al-Khayr of Evansville, IN; brother, Albert Johnson of Evansville, IN; brother-in-law, Clarence (Tarja) Fisher of Newburgh, IN; sister-in-law, Barbara Moore of Evansville, IN; and a special cousin, Tommy Jessup of Evansville; nephews, nieces, and countless friends and a loving church family. Services Saturday, August 22, 2015 at 11:00 a.m. at Line St. Church of Christ with visitation from 9:00 a.m. until service time. R. Mason Brothers Memorial Chapel in charge of arrangements. Condolences at www.masonbrothersfuneralservices.com.

&#8220;Blessed are the dead who die in the Lord for they shall rest from their labors and their works do follow them.&#8221; With the wind beneath his wings, John Henry &#8220;Roosevelt&#8221; Carson, age77, left this world on Tuesday, August... View Obituary & Service Information

The family of John Henry Roosevelt Carson created this Life Tributes page to make it easy to share your memories.

“Blessed are the dead who die in the Lord for they shall rest...

Send flowers to the Carson family.